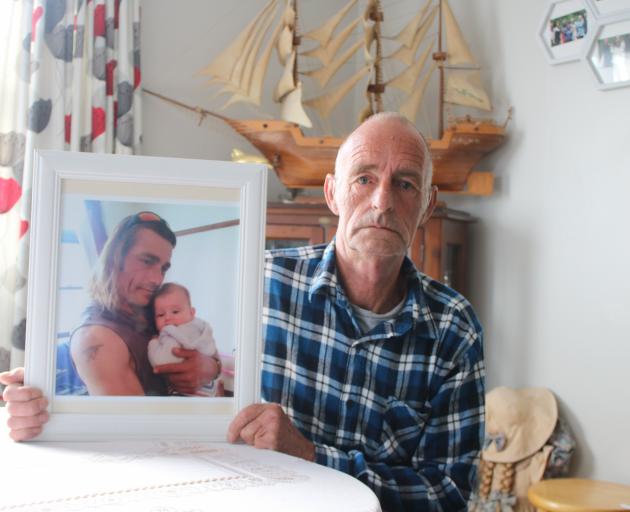 Bruce Cawley holds a photo of his stepson, Craig Andrews, who was flown to Dunedin Hospital in a critical condition yesterday morning. PHOTO: KAYLA HODGE
The family of an Oamaru whitebaiter swept out to sea owes a mystery man a "hell of a lot".

Craig Andrews was rescued by helicopter yesterday morning, after being dragged 3km off the north side of the Waitaki River mouth.

He was flown to Dunedin Hospital in a critical condition.

The 40-year-old suffered a heart attack mid-flight, and was admitted to the intensive care unit.

His mother, sister and partner were by his side last night. His stepfather, Bruce Cawley, described his condition as "50:50".

Emergency services were alerted to the accident by a whitebaiter on the south side, and without him, Mr Andrews would still be missing, his stepfather said.

"I hope the guy would like to get in touch with us to thank him.

"It would have been a different scenario.

"I’m just so, so thankful to the emergency services, too. They do a marvellous job."

The fact he was wearing a lifejacket, a gift from his stepfather, made the difference, Mr Cawley, who was a firm believer in taking safety precautions, said.

"It doesn’t matter whether you’re my age, his age, or a young kid — it’s just a safety thing.

"[Without it] the water would have taken him under and they would still be out there searching."

Mr Cawley described his stepson as a down-to-earth man, and said his 2-year-old daughter was the "sparkle of his life".

The incident comes after a whitebaiter in the same area survived after being swept out to sea three weeks ago.

The man was wearing a lifejacket and made it back to shore unaided.