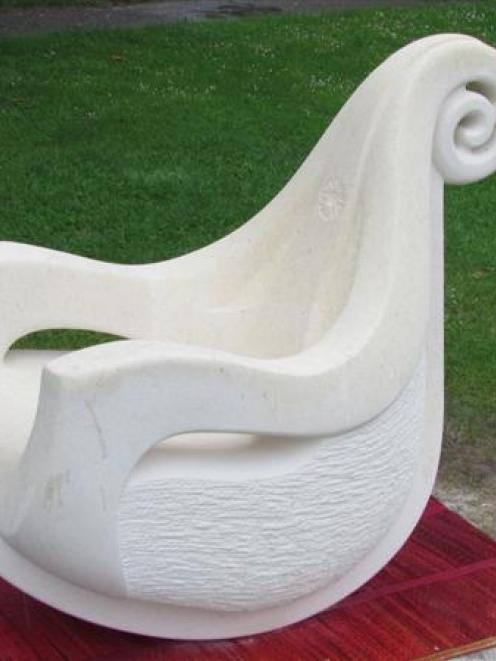 Site manager Reid Wilson, owner of the sculpture park at Hampden, said 14 of the 30 finished pieces were sold.

Martin Mlcoch's work, carved from Oamaru stone into a rocking chair of sorts and titled Throne of the Ancient Sea Kings, attracted the day's highest bid, selling for $4000 to a buyer from Hastings.

Mr Wilson said other artists had sold smaller pieces throughout the final week, and the carvers had had a "great couple of weeks".

"It was one of the most jovial, happy combinations of people we've had come here," he said, while helping to dismantle the site in the rain on Monday morning.

"There were a lot of friendships made, which is always a great part of it," he said.

"The weather was magic on Saturday but we battled the weather gods on Sunday.

"The people who were really keen had the brollies and battled it out." The silent auction, held the same day as the Victorian Fete, had been "really well supported", and locals had made the carvers feel at home with gifts of cakes and lollies.

Mr Wilson deflected suggestions the biennial event should be held every year, saying it rolled around quickly enough already.

The unsold works will be transported to the Friendly Art Gallery and Sculpture Park at Hampden, where they will be sold by Mr Wilson on the artists' behalf.