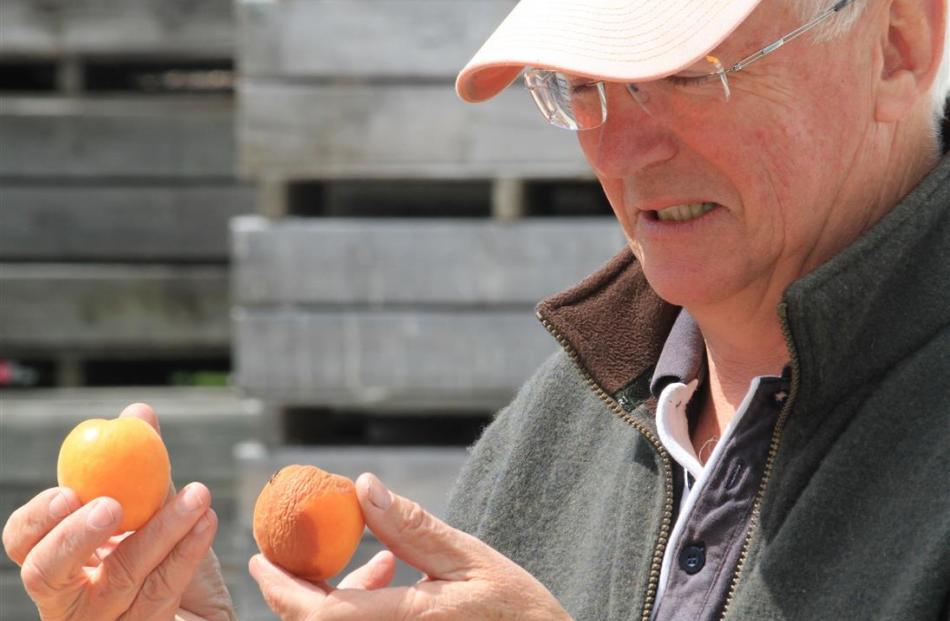 Waitaki Orchards harvest manager James MacKenzie says the wet weather over the past two weeks has been ‘‘devastating’’ for the orchard. Photo by Hamish MacLean.

After months of farmers crying out for rain, overcast, wet weather has badly affected crops on a North Otago orchard.

Horticulturists, grain growers and vegetable growers have been hit hard by the past two weeks' inclement weather, while irrigation schemes have been switched off.

For Waitaki Orchards harvest manager James MacKenzie, the continuous damp days could not have come at a worse time.

Nearly two-thirds of the Kurow orchard is planted in apricots and what started as a poor season became worse when the rain and clouds settled in over the past two weeks.

"More than catastrophic; it's devastating,'' he said.

On nearly half the 35,000 trees on the orchard there were "massive'' fruit losses; 30% of the orchard was planted in Sundrops, the principal crop, and 17% was planted in Clutha Gold. Both varieties were experiencing a 70% loss this year.

It was not simply that fruit was being picked "super soft'' - rain damage was affecting the bottom line at the orchard.

Typically, 50% of the fruit would be "prime product'' or export quality, but this year that amount had been cut significantly.

Cropping farmer Peter Mitchell, of Weston, said his property had received 65mm of rain so far in January and 20mm since Saturday.

The recent wet weather had been pushing the workload back for the harvest.

Nothing had been done on the farm harvest-wise for a week, and if the rain continued, moisture could begin to damage the crops.

"To be fair, we've probably had some [damage] but we're just not seeing it yet ... and we won't really know the severity of that until we've completed the harvest,'' he said.

Only once the harvest was gathered, near the end of March, would he be able to tell whether 2% or 20% of the crops had been lost.

He, too, said warm sunny weather was needed "now''.

"All of a sudden broccoli - and it was beautiful looking broccoli two weeks ago - is now just rotting,'' he said.

"It's very frustrating if you're a grower, whether it be grain or fruit or veggies. You can see what's happening and you've got no control over it. You've just got to let nature take its course.''

He said he dealt with 85 farmers from Kurow to Duntroon and the wet weather had been a "gamechanger'' for many.

"I've lived here since 1975 and it was certainly up there with one of the drier droughts I've seen shaping up pre-Christmas. It's gone from one extreme to the other - just a complete reversal.

"It's one man's blessing and another man's omen, depending on what you're doing.''