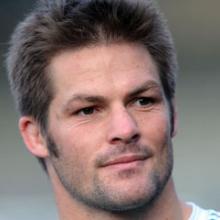 Richie McCaw
The fundraising committee tasked with securing funds for a statue of former All Black captain Richie McCaw in Kurow is inching closer to the figure required to apply for funding from the Otago Community Trust.

The committee, a sub-committee of the Kurow Museum Committee, was established in 2016 to kick-start  the project..

It had so far raised about $23,000 of the $30,000 required to apply to the community trust for a  more significant grant, and while the going had been slow, fundraising committee member Peter Ellis said the group was fully committed to making the project a reality.

The committee had "targeted" the trust for funding, confident the statue would be significant enough to the province to qualify for a grant. Most of the money raised had come in the form of small donations, including a significant amount  from people who had dropped money into a donation box mounted at the future site of the statue, where a cut-out of McCaw stands.

A Givealittle page had also been set up.

A quiz night fundraiser is being held on August 31 at the Kurow Memorial Hall, where an All Black jersey signed by the members of the 2015 World Cup winning-squad will be auctioned. Mr Ellis said a major sponsor still needed to be found. The committee planned to approach both the All Black jersey sponsor —  finance and insurance company AIG — and adidas to gauge their interest in supporting the project.

It was likely  it would be erected on an area of private land next to the town’s public toilets, near the intersection of State Highways 83 and 82. Lyttelton sculptor Mark Whyte has been commissioned to create the bronze statue, which will show McCaw standing tall with a rugby ball.