'Get it right' message for hearing commissioners 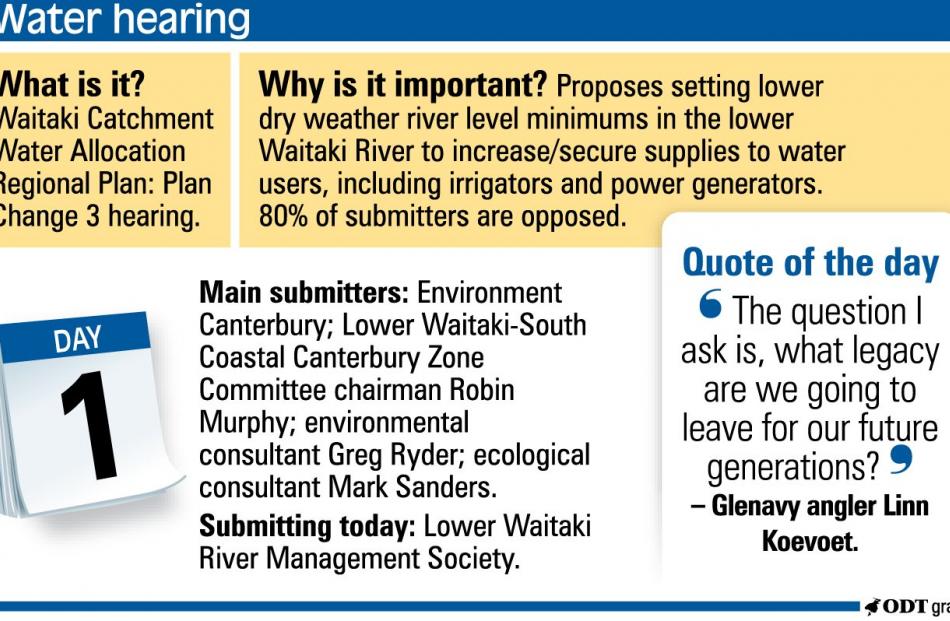 Battle lines have again been drawn over water in the Waitaki River, but this time around not as vehemently as almost a decade ago.

A three-commissioner panel is hearing arguments over changing a water allocation plan for the Waitaki catchment and nine days have been set aside to consider the most contentious issue: lowering the minimum flow.

But the reaction this time with about 560 submissions is a far cry from when the original Waitaki catchment water allocation regional plan was first considered in 2005. Then, about 1300 submissions were received.

''We need to get it right this time,'' was one message yesterday to the panel.

It was delivered by natural resources engineer Keri Johnston, who was speaking at an the Environment Canterbury (ECan) hearing.

Ms Johnston was representing five farms and an orchard owner in the Waitaki Valley between the Waitaki Dam and Black Point who have supported the overall thrust of the proposal, but wanted some changes.

In particular, they said the amount of water allocated in the original plan for agriculture and horticulture did not reflect actual use in their area and meant it was over-allocated under existing consents.

They supported increasing the allocation between the Waitaki Dam and Black Point to allow for existing use and some for future use, as intended in the original plan.

The main issue was the original plan's ''bottom line'' was wrong from the beginning and this time it needed to be right.

One of those involved in the original process was Glenavy salmon angler Linn Koevoet, who is also a member of the Lower Waitaki Management Society and secretary-treasurer of the Waitaki Riparian Enhancement Society.

''The result was a compromise, but it was representative,'' he said of the original plan.

The proposed plan change gave greater weight to hydro generation and irrigation which wanted to push into the minimum flow set by the original plan.

The plan change was prepared by the Lower Waitaki-South Coastal Canterbury Zone Committee, a community committee established through ECan as part of its Canterbury Water Management Strategy.

The committee identified issues with plan that had arisen over the past 10 years, then consulted the community and stakeholder groups on how to resolve them.

Committee chairman Robin Murphy said getting ''all the people around a table'' was an excellent way to come up with solutions that resulted in the plan change proposal.

New consents issued since the allocation plan became operative in 2006 had a minimum flow of 150cumecs at which water use had to stop.

However, consents which existed before the plan had minimum flows ranging from zero to 130cumecs.

This created uncertainty, particularly for irrigators and Meridian Energy's power generation, over what minimum flows would apply when those consents were renewed.

It would also affect the reliability of water supply those consent holders had at present.

''The zone committee was keen to address this issue and provide clarity to all users, including Meridian Energy, as to their long-term reliability [of water],'' he said.