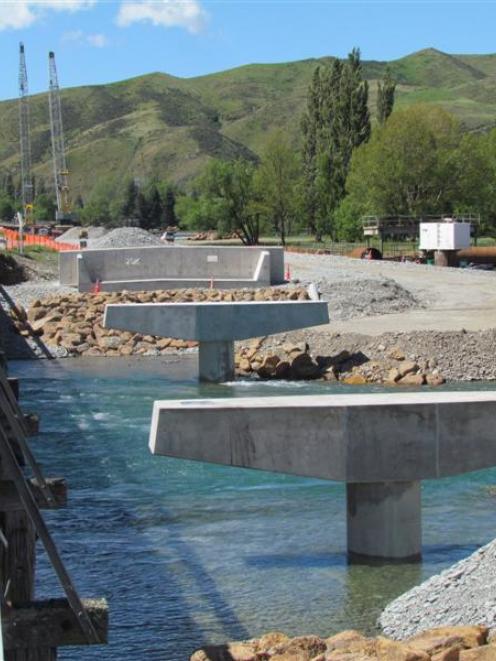 Progress on replacing the Kurow twin bridges this week. Photo by Andrew Ashton.
A $20 million project to build two bridges over the Waitaki River at Kurow is being credited for providing a winter boost to the local economy, even before the bridges are officially opened next year.

Since work to to replace the ageing 132-year-old Kurow twin bridges with a 96m-long bridge and a second 206m-long bridge began in April, the Kurow Motels have experienced about a 70% increase in bookings from last winter.

Motel co-owner Mike Rawson said the additional accommodation required by workmen had been ''very good'' for moteliers and the local economy.

''It's been pretty good. It's certainly been a help and it's been a lot better over this winter than it was last winter, because of the workers.

''It's certainly been good for Kurow and for us as accommodation providers.''

Kurow Hotel publican Ross Paton said the presence of the workmen had led to a rise in business for many people.

''The bridge guys rent about five or six houses around town, so that automatically brings them around town and [they] stop at all the local shops and businesses.''

Mr Paton said the work on the bridges, combined with other construction projects on irrigation systems and the installation of fibre-optic cable, meant there had been ''quite an influx'' of extra people to the town.

New Zealand Transport Agency (NZTA) highway manager Colin Knaggs said a total of 23 workers were on site at present, and with construction work on the NZTA-funded project progressing well, both bridges were expected to be opened late next year.

''Piling was completed in September for the smaller of the two bridges on the Kurow side of the river, and work is well advanced on installing this bridge's crossheads and abutments.''

The assembly of structural steel was scheduled to start on November 4, he said.

''Piling on the second bridge - the longer of the two on the Hakataramea side - began in September. Work is already under way on the second of the seven piles for this bridge.''

He said a 250m temporary work platform was also being built alongside the second bridge to assist with construction of the new bridge and demolition of the old bridge.

''It is expected work on building this platform will be completed next week and piling will begin at the Hakataramea side of the river in a fortnight.''