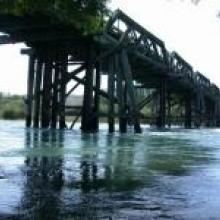 The northern end of the twin bridges. Photo by David Bruce
The 127-year-old twin bridges across the Waitaki River on SH82 at Kurow are again on Transit New Zealand's list for consideration for replacement.

The wooden bridges, built in 1881 for road and rail traffic, are one of the last of about three similar constructions in NZ and were scheduled for replacement in 1999, but had been removed from the list because of power-scheme proposals.

They have withstood major floods in the river, including one in 1992 when they were closed in January because of damage to one of the piers, but were reaching the end of their economic life, Transit Christchurch regional manager Colin Knaggs said yesterday.

Transit was focusing on replacing the existing bridges with two concrete, single-lane structures, built with a pier-loading capacity to allow widening to two lanes if required.

They would be built slightly downstream from the existing bridges, using the existing approaches as much as possible without having to realign the highway.

Funding had been granted to revisit assessing the project, which would determine its place on the programme for national funding. Mr Knaggs said advice from its national bridge consultant was that the existing bridges would be at the end of their economic life in 2014.

Work on planning to replace the bridges started in 1999, but was put on hold because of Meridian's proposed Project Aqua. That scheme proposed a weir at Kurow to divert water into a 61km power canal, which would have affected the bridges.

Meridian cancelled Project Aqua in 2004, but then proposed its north bank tunnel scheme on the lower Waitaki River, below the Waitaki dam.

Once Transit knew the scope of the north bank scheme, it was confident it could begin work again on replacing the twin bridges. Mr Knaggs said Transit would be consulting the New Zealand Historic Places Trust over the historic importance of the bridges.

It had also had a meeting earlier this week with a Kurow community group that had a concept plan to develop the island between the bridges for recreational and visitor use.

That was to determine what work could be carried out on the development without being in conflict with replacing the bridges. ‘‘We don't want to go in and undo any work the community will be doing. It will be very easy for us to work in with them and hopefully add to what they want to do,'' he said.