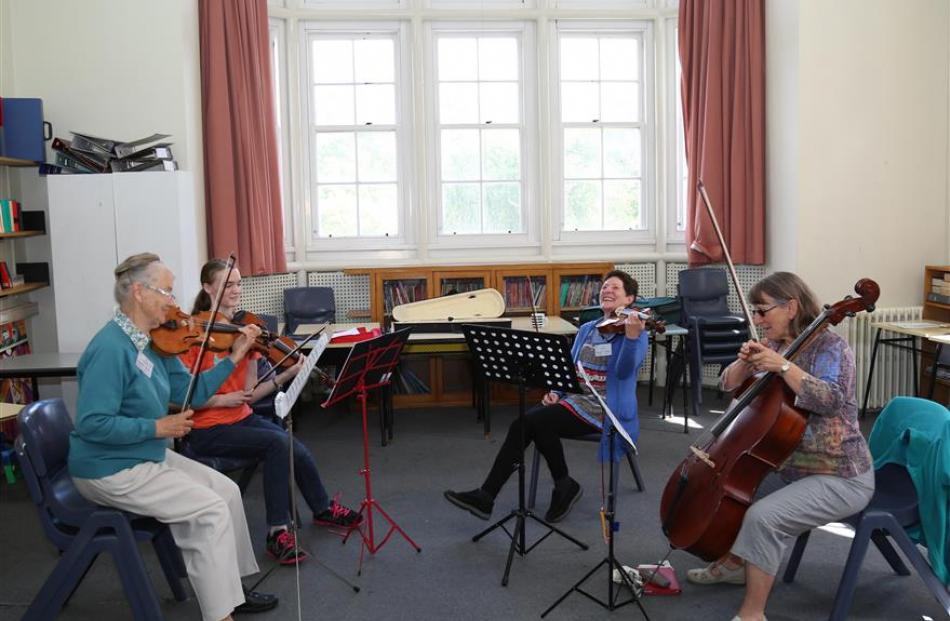 (From left) Lyndsay Fenwick, of Christchurch, Grace Shaw, of Geraldine, Rosemary Miller, of Timaru, and Kathy Thompson, of Dunedin, play music together at the Waitaki Summer Music Camp. Photo by Rebecca Ryan.

Musicians of all ages and abilities are gathered in Oamaru for the love of music this month.

The chamber music programme started on Thursday and runs until tomorrow.

The orchestral programme starts next week.

The camp culminates in a public concert conducted by Peter Adams at the Waitaki Boys' High School auditorium on Saturday, January 16 at 7.30pm.

One of the organisers, Tim Wilkinson, said there was nothing else like the Waitaki Summer Music Camp in the country and many participants had described the event as being like a musical holiday.

This year's camp has attracted 35 musicians from around Australasia, their ages ranging from 15 to 91 years old.

"We've got three people from Australia and [other] people come from all over New Zealand, really,'' Mr Wilkinson said.

Most stay for both the orchestral and chamber music programmes.

The tutors were all professional musicians and travel from Dunedin, Christchurch and Auckland to teach each year.

"It's nice - it's summer of course - and the venue is great and Oamaru is an interesting place to visit,'' he said.

"It's obviously a format that works because it's been going for 20 years and people like it and it's very popular.''

There were always new musicians each year, but most return and for many, it was a highlight of their year.

There are no auditions; organisers let musicians self-select.

"You need to be of a reasonable ability,'' he said.

For Mr Wilkinson, the music camp has been a family affair.

He and his wife have attended it for the past 11 years and their two sons have also taken part in previous years.

"My wife plays the violin and when we first started coming, our two sons came as well,'' he said.

His family members have made lifelong friends from the camps and have encountered past participants all around the world.

"My son's in the UK and the orchestra he's playing in, there are four other people who have all played here [in Oamaru],'' Mr Wilkinson said.