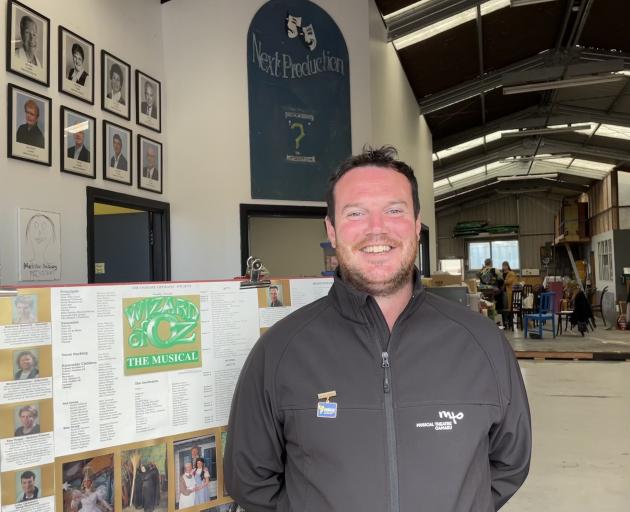 Since he was 11 years old, Mr Martin has been involved, in one way or another, in every show in his hometown. If he has not been on stage, he has been helping out backstage, or front of house, and has even dabbled in assisting with lighting, production management and direction.

Last month, his contribution to the society and musical theatre community was recognised at the Musical Theatre New Zealand (MTNZ) annual meeting, when he was announced as a recipient of an MTNZ merit award.

Mr Martin (36) said he had no idea he had been nominated by his fellow committee members, and was speechless when his name was read out as part of the livestreamed meeting.

His first taste of musical theatre was in 1997, when he auditioned for the Wizard of Oz. His older sister was auditioning, and his mother encouraged him to give it a go as well.

"I didn’t really have a choice — you know what mums are like," Mr Martin said.

He was cast as a Munchkin, loved the experience — and "that was the beginning of my life, really".

There had been a lot of highlights over the years, and every show was memorable and enjoyable for different reasons, he said.

Most of his on-stage roles have been in the company, with the exception of Chicago in 2013, when he played the role of
Fred Casely. His biggest roles have been behind the scenes, where he has helped direct a theatre restaurant production, and was co-production manager for Mamma Mia!.

"I used to really like being on stage, but it does take a lot more time, and I have really enjoyed being behind the scenes in the past few shows," he said.

However, he still enjoyed being able to make a cameo appearance on stage when the opportunity arose.

His love for musical theatre was all about the people, he said. The bonds formed during a show were special — and he had lifelong friends through his involvement with the society.

"You get to meet lots of new people," he said.

"There’s people from all sorts of different backgrounds as well. You can have a newspaper reporter and a doctor, a lawyer — people you probably just wouldn’t normally be friends with."

Mr Martin works as a supervisor at the Alliance Pukeuri meatworks, and is also a keen sportsman. Cricket takes up his Saturdays in summer, as does football in winter, but he always makes time for musical theatre.

"It does make it quite busy, but you fit it in, and then when the show’s over you go, ‘How the hell did I have time for all that?’."

Musical Theatre Oamaru president Melissa Yockney was thrilled Mr Martin had been recognised for his contribution to the society over the past 25 years.

Whether it was pack in or pack out, organising the bar for a theatre restaurant, or attending weekly Sunday Shed Sessions, Mr Martin could always be relied upon to offer a hand, Miss Yockney said.

"Daniel can be many things to many people, but for us he is synonymous with all things theatrical, and our society wouldn’t be the same without him."

In 2009, he won the Nola Speir Patron’s Youth Encouragement Award, and also joined the Musical Theatre Oamaru committee. He remains a member of the committee to this day, and has been president for five years. He has also been a strong supporter of the society’s children’s theatre since its inception.

"His ability to encourage and mentor other young people was acknowledged in that 2009 award and we are pretty sure Nola Spier would be very proud of all Daniel has achieved in the years since," Miss Yockney said.

Report at odds with submissions