Adult learning week is almost over. Ben Guild caught up with 61-year-old Oamaru man Brian Hanham at Literacy North Otago to chat about the effect education was having on his life. 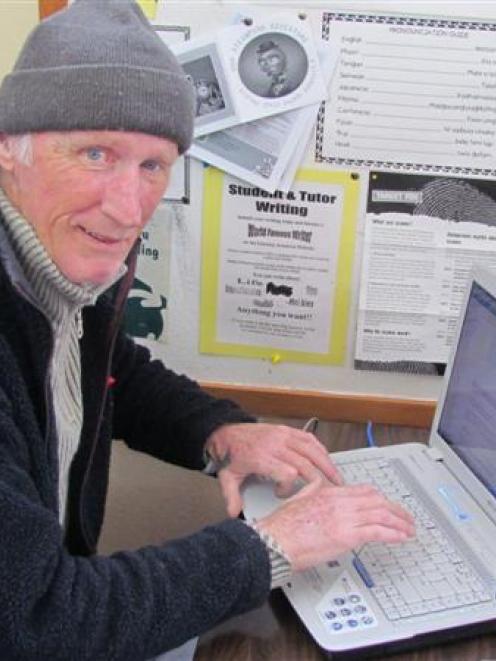 Oamaru man Brian Hanham at Literacy North Otago last week. Photo by Ben Guild.
Brian Hanham left school when he was 15 because he did not like arithmetic.

He returned to organised learning last year after moving to Oamaru following an episode related to his bipolar disorder.

He has attended sessions at Literacy North Otago three or four days a week for the last 18 months, and art classes at the North Otago Art Society.

He says it has been like turning back the clock.

"I don't feel my age," he said from an office at Literacy North Otago last week.

"I've got to stop looking in the mirror. My life has changed so much here. I feel great about coming to literacy and learning new skills ... You're never too late."

He swells with pride when talking about shortcuts on keyboards and emailing grandchildren in Christchurch.

Sections of the Oamaru community had rallied around him, and he was filled with praise for them.

"The thing down here is people haven't judged me or if they have, they haven't faced me. It is just such a welcoming place."

A sense of community was important to Mr Hanham.

"You get lost when you're on your own, and [you] shut yourself off," he said.

And with education comes independence.

"I'm starting to do things on my own," he said.

"Cooking classes [with Home Support Services Otago] have helped me to take time to select things for food and not rush things."

Mr Hanham, who lives in a Housing New Zealand flat and was referred to adult learning by his brother Graham, hopes to progress to the point where he can obtain a job for four or five hours a week.

The centre had about 370 people on its books at the beginning of the year.

Individuals received tutelage at their own pace.

It was one of a number of support services in the district with ties to different community groups, Ms Jansen said.

Organisations were prevented from discussing individual clients but could refer clients to each other.

"Knowing what each agency does allows us to strengthen the community," she said.

Numerous studies had shown those who looked for activities had better outcomes.

"Self-service hospitality" in the form of a cup of tea and a biscuit awaited those who walked through the organisation's doors.

Gestures like that meant a lot to Mr Hanham.

"I don't know how to put it but I guess I feel really loyal to this place because it makes me feel this way," he said.