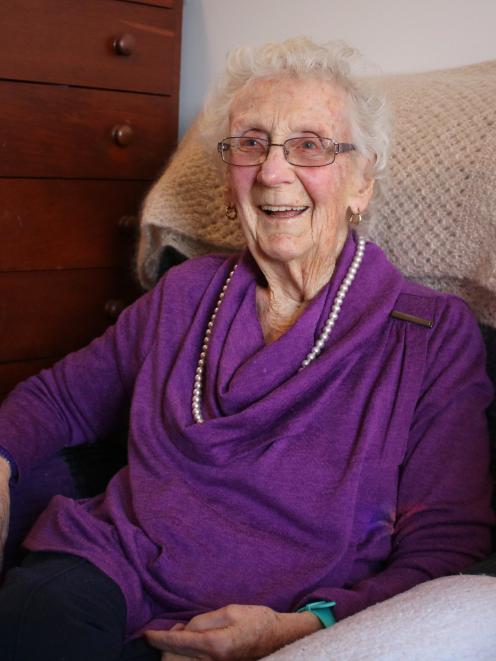 Palmerston’s Elizabeth ‘‘Betty’’ McGregor turns 100 at the Kimberley Rest Home today. PHOTO: KAYLA HODGE
There are some things in life you just can not plan.

Turning 100 years old is at the top of that list for Elizabeth McGregor — known as Betty — who celebrates her milestone birthday today.

A wry smile graces her face when asked how she feels about reaching her century.

The day will be topped off with a special party at her Palmerston Kimberley Rest Home residence. It will be a large affair comprising friends from the various groups and clubs Mrs McGregor belongs to, including the Palmerston RSA, gardening club, senior club, bowls club, knitting group, Dunback bowls club and the New Zealand Federation of Women’s Institutes.

Mrs McGregor was very excited about the party "they’re putting on for me" but concluded there was no secret to her long life.

She did not travel overseas until she was 69, spending nine months with the women’s institutes in Europe. She celebrated her 70th birthday in Edinburgh in 1991 — the city where her mother was born — and it became one of her fondest memories.

Mrs McGregor was born in Mataura, to Jim and Elizabeth Sim. They lived on a dairy farm in Edendale with her siblings — Ron, Jack, Bill and Joyce — before shifting to Invercargill.

She completed a shorthand tech course, and then worked in the post office and tax office in Wellington, Invercargill and Dunedin, where her family eventually moved.

After her marriage to Alfred McGregor, the couple moved to the North Island for work, before eventually returning to Dunedin.

In the 1970s, Mr and Mrs McGregor relocated to Palmerston for Mr McGregor’s job in the railway industry.

Her husband and siblings had since died.