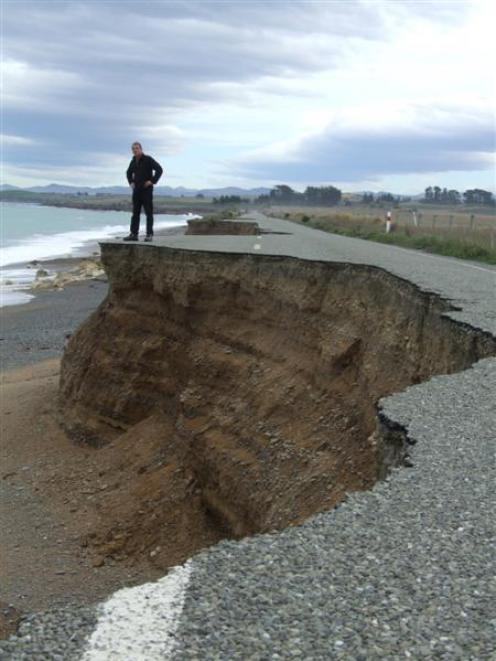 Graeme Clark views the effect of coastal erosion on a closed section of Beach Rd, between Gardiners and Thousand Acre Rds. Photo by Sally Rae.
Oamaru man Graeme Clark has urged the Waitaki District Council to consider all possibilities to retain and maintain the coastal road from Oamaru to the Waianakarua River mouth, saying it is not just a road but an "experience".

In a submission to the council's draft annual plan, Mr Clark said erosion of coastlines was a global issue and communities must rise to the challenge of slowing the advance of the sea.

He wanted the council to explore all avenues of assistance and subsidies and to set aside funding in the roading budget this year for a protection plan and strategy to combat erosion.

Beach Rd was an important link between Oamaru and Kakanui - "as one resident told me, one of the best things about living in Kakanui was the Beach Rd drive to town; it is a chance to reflect" - and also a vital tourist route, increasingly used by cyclists, coaches and campervans.

"It has important fossil and archaeological sites along the way. There are people making a living out of this asset, with the likes of backpacker accommodation, a cafe-restaurant and farming."

There was an opportunity to build a sea wall, with the materials needed, such as large blocks of Oamaru stone, available in the district, he said.

It proposed that while some maintenance would continue, ultimately coastal routes would be abandoned as they became unsafe.

The public will have an opportunity to share their views on the strategy at roadshows on May 17 at the Kakanui Community Centre between 10am and midday, and at the Oamaru Opera House between 1pm and 3pm.

Submissions close on May 28. The council will hear submissions on June 9 before making a final decision on the strategy.