Oamaru girl keen to take on the world 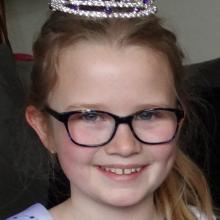 Keana Kearns
An Oamaru girl with multiple national and Australian beauty pageant titles to her name has ambitions of one day representing New Zealand at the Miss Universe competition.

If that does not work out, training to be a nurse would be fine too.

Keana Kearns (11), a pupil at Weston School, entered the world of beauty pageants about three years ago.

Since then, she has won  titles in New Zealand and across the Tasman, including the first two competitions she entered. By winning the Pre Teen Miss New Zealand title,  Keana has qualified for the Royal International Miss pageant, to be held in Orlando, Florida, in the United States, this month. Keana’s involvement began when she and mother Amber Kearns watched the television show Toddlers & Tiaras.

Ms Kearns said when her daughter first talked to her about competing, she was aghast.

However, she eventually warmed to the idea after researching what New Zealand and Australian pageants involved.

"We found a pageant director in Australia ...  she was coming to Rangiora, back in 2015, and was putting on a little pageant and dance competition. Keana did a couple of lessons with her over Skype and we did our first pageant in Australia that year and she won the whole thing."

Pageant  categories include outfit of choice, causal outfit, modelling, talent and an interview.

Keana said she loved "going up on stage" and her self-confidence had grown as she got used to performing.

She said competing in the US would be a "huge opportunity".

They hoped to raise the $6000 required for Keana’s family to travel to the pageant through Keana’s Pre-Teen Miss New Zealand World Finals 2019 Givealittle page.