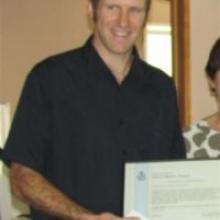 It was a country policeman's worst nightmare.

Through a crack in the bedroom door of an Omarama house, Const Mander could see a 3-year-old boy in his father's lap. A knife was held to his throat. Nearby was a 4-month-old baby.

Const Mander could hear a man threatening to kill the children and himself.

Armed, and knowing back-up was up to an hour away, Const Mander ignored the training which instructed him to contain the situation and wait.

Instead, he engaged the man, and began to negotiate.

"I was well protected with my options, so decided to go in and protect the children," he said yesterday following the presentation at the Omarama Fire Station of the New Zealand Police Silver Merit Award for bravery.

"I got into the room a couple of times, but there wasn't enough space."

The citation, read out at the presentation by Senior Sergeant Jason McCoy, of Oamaru, tells what happened next.

"During this time, the offender's demeanour swung from being highly volatile to talking calmly.

"The negotiations went on for over 30 minutes before the offender surrendered to the constable."

Const Mander said he reassured the man "and without buying into his craziness I managed to talk him around".

So effective was Const Mander's approach that the man was in custody before the armed offenders squad, or any back-up, arrived.

Const Mander did not appear entirely comfortable playing the hero during yesterday's presentation.

"Thank you very much for this award. A lot of this stuff goes unrecognised," he said.

"It's an honour and very humbling because I'm only a small part of a team which has ensured people good results from this.

"It was just another day at work; that's what you do."

Being able to respond quickly came with the territory, he said.

"You never know when there is going to be a time when you're going to get those incidents."

Communication was key in such instances.

"When this sort of situation presents itself to you, it's actually about how you talk to people," he said, before paying tribute to the prosecutions team and victim support who had combined to achieve an acceptable outcome.

The mother and children have since moved out of the area, and Snr Sgt McCoy said he believed the man had been released from prison.

Const Mander's actions had been "in keeping with the highest traditions of the New Zealand Police", he said.

Const Mander said he had been told by a police area control officer from Christchurch that the Omarama and Twizel police stations were among the most isolated in the country.

"It's a bit of a lottery if the guy at the next station is available," Const Mander said.