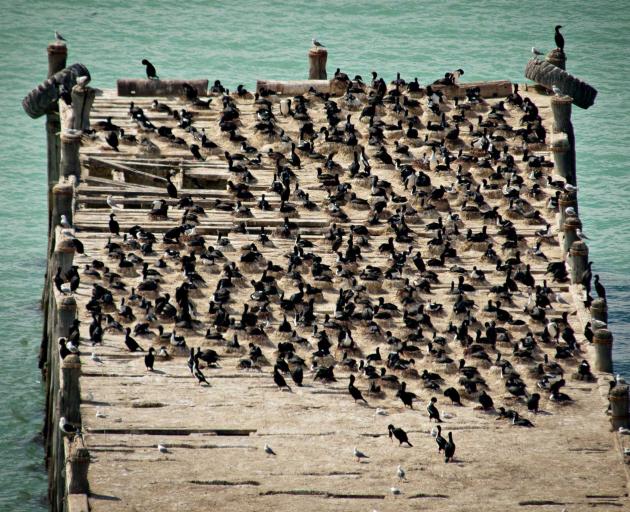 Dr Chris Lalas has monitored the rare birds since 1977 and after counting about 346 nests on the abandoned Sumpter Wharf this spring, he said ``left alone it will become the largest colony of the species''.

``The population centre is moving northwards and has been for decades.''

Previously, the northernmost colony of the birds was on Maukiekie Island, near Moeraki, where birds started nesting in the 1960s.

But in 2014, he noticed the Otago shag had started to nest on the 200m-long Sumpter Wharf, which was closed to traffic in 2004.

It now represents the northernmost colony of the species,

Dr Lalas estimated there were about 120 nests in the first year of breeding at Oamaru Harbour but said his count came too late in the season to ensure its accuracy.

``It's easy to grasp that it must have been a mass of birds turning up from somewhere else to start the colony,'' Dr Lalas said.

``And that's quite normal for Otago shags. They don't start at a new spot with just one or two nests; it's a good number.''

Several years ago Maukiekie Island had 600-odd nests, but this year had only about 40 more nests than Oamaru.

Nest numbers were also falling at Taiaroa Head, near Dunedin, where the birds started nesting in the 1940s, and those birds were also probably migrating north.

The birds did not feed in the immediate vicinity of their nests; the Otago shag feeds alone at sea on flatfish.

Roughly 2.5kg-3kg in weight, the Otago shag could dive as deep as 50m and stay under water for three to four minutes at a time.

While Otago shags sometimes shared the wharf with spotted shags, which nest in the cliffs of Cape Wanbrow, they would displace those birds from roosting there as the colony grew, which showed ``the importance of Sumpter Wharf to that species'' and the colony's capacity to grow.

``There's plenty more wharf for them to nest on,'' Dr Lalas said.

``In world standards it's an extremely rare species ... plus it's extra special because it's endemic to Otago.''

While it had been suspected since the 19th century, scientists from the University of Otago had last year been able to show the Otago shag was a separate species from the Foveaux shag.

The species had yet to be given a threat status, ``but I'm pretty sure it will be classified as endangered, because it's got such a restricted range and a relatively small number of birds''.