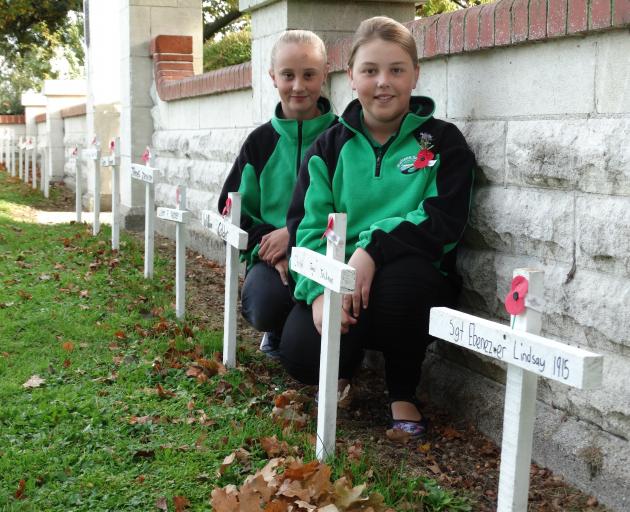 Maheno School pupils Lillie Silcock (11) and Brooke Purvis (11) at the Maheno War Memorial with some of the white crosses made by the school's pupils to mark Anzac Day. PHOTO: DANIEL BIRCHFIELD
In the lead-up to each Anzac Day, Maheno School, south of Oamaru, likes to do something special to honour the memory of those from the area who never came home from World War 1.

For the past few years, 42 white crosses have been placed on the lawn next to the town's war memorial, each bearing the name, rank and year that a soldier died during the conflict.

Maheno School principal Ryan Fraser said it was a way the school could pay respect to the more than 40 soldiers from the area who made the ultimate sacrifice.

``We made them about three or four years ago. The kids were given the challenge at school to get a name off the cenotaph and they did a bit of a project finding out the history and the stories of those soldiers.

``To have 40-something names there is pretty crazy really. It's a huge number for such a small area and we wanted the kids to acknowledge that.''

Maheno School pupil Lillie Silcock, who attended the town's Anzac Day service with several of her fellow pupils, was well aware of the price many young men from the area paid a century ago.

``It kind of makes you sad knowing how many people died ... all of those people gave up their lives for us. On Anzac Day, you remember all of the people that died.

``Anzac Day is really important to me because I have a couple of my family who went to war who never came back.''

Mr Fraser said the most valuable lesson that came out of the exercise was educating children about the horrors of war and not glorifying it.

``It's about the realisation of what people gave up and the sacrifice people made. Some kids, I think they think the war was a glorious thing with the guns and the bangs and that kind of thing. It wasn't . . . they understand the horror of it. It connects them more with the area of Maheno as well.''

This year, Mr Fraser's class learned about New Zealand's role in the Battle of Passchendaele on the Western Front in 1917.

``We wanted to teach the kids to realise it's more than just about Gallipoli,'' Mr Fraser said.

``There's other battles and at Passchendaele it was a pretty horrible situation and the darkest day in New Zealand's history.''