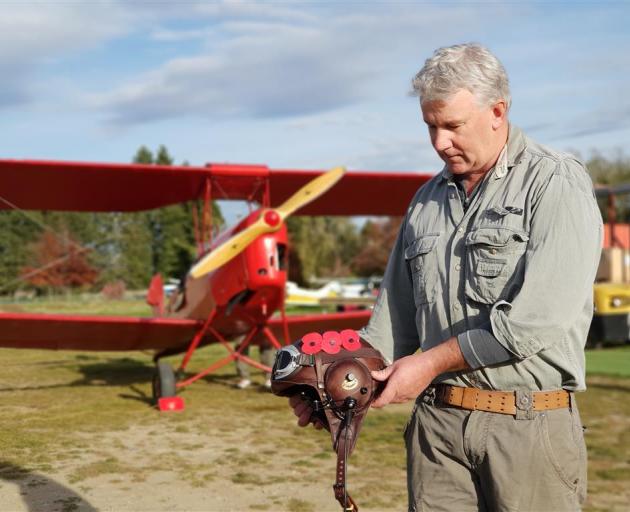 Before taking off in a Tiger Moth for a flyover of an Anzac Day service in Lowburn, Daniel Perriam, of Bendigo, places three poppies in his helmet in memory of his three great-uncles who died in World War 1. PHOTO: SEAN NUGENT
A family heirloom plane has honoured an unfathomable loss in a war that both liberated and stole generations.

Three brothers from the Foster family in Quartz Reef Point, near Northburn, died in World War 1: Robert (21) and William (27) at Gallipoli and Henry (28) at the Somme, after he had already served at Gallipoli.

They left behind their sister, Mary Ellen Christina, who went on to marry Henry Perriam and settle in Bendigo.

Their grandson, John Perriam, said the knowledge that nearly an entire side of the family had been wiped out would never be forgotten.

``It's something that we [the Perriams] are very, very aware of, and it's fantastic to see Anzac Day being remembered now by the young people,'' Mr Perriam said.

This year was the first time an Anzac service had been held at Lowburn, and the Foster brothers were honoured during a speech by another of their great nephews, Bob Perriam.

He spoke of the ``catastrophic loss'' and ``irreparable effects'' the loss of so many young men had on rural communities such as Lowburn, and of the loss of the Foster family name.

The Lowburn service also featured a flyover by three Tiger Moths, one of which was

The family had decided on the gesture after learning an Anzac service would be held at Lowburn this year for the first time, and it was ``pretty special'' to be able to do the flyover, John Perriam said.

A commemorative window in honour of the three Foster brothers and their father, Edwin, is also in the Lowburn church, and a commemorative seat and three large poppy replicas are on the corner of Perriam Pl and Foster Pl, in Perriam Cove, in memory of the brothers.