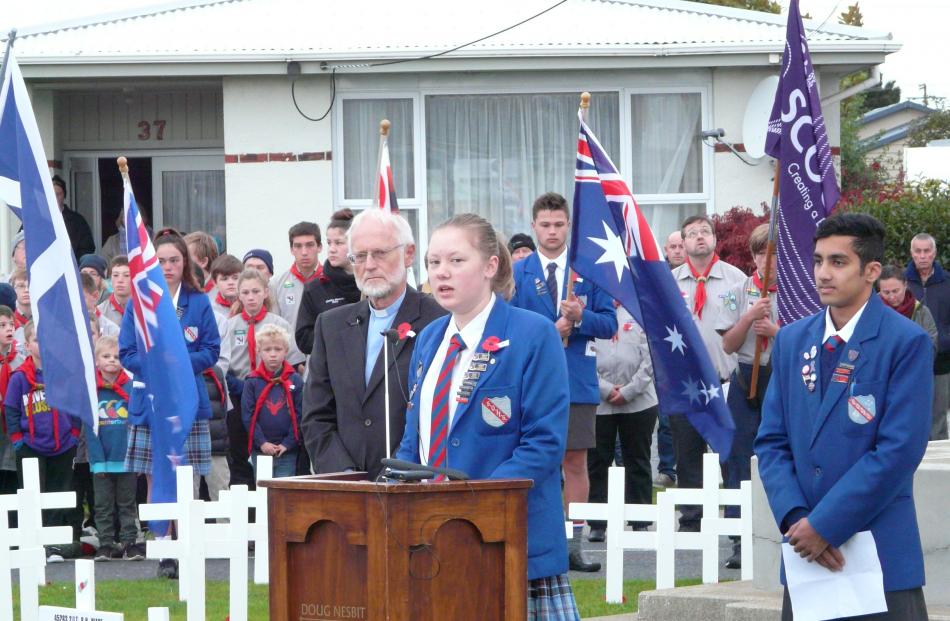 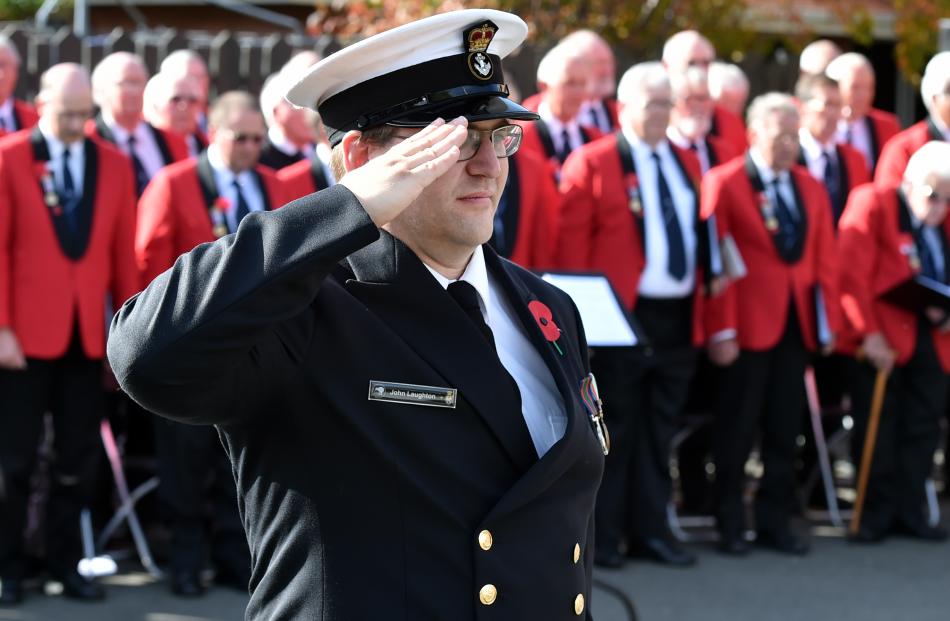 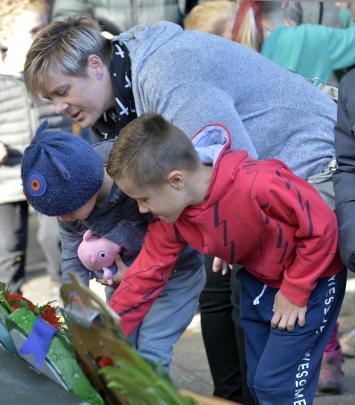 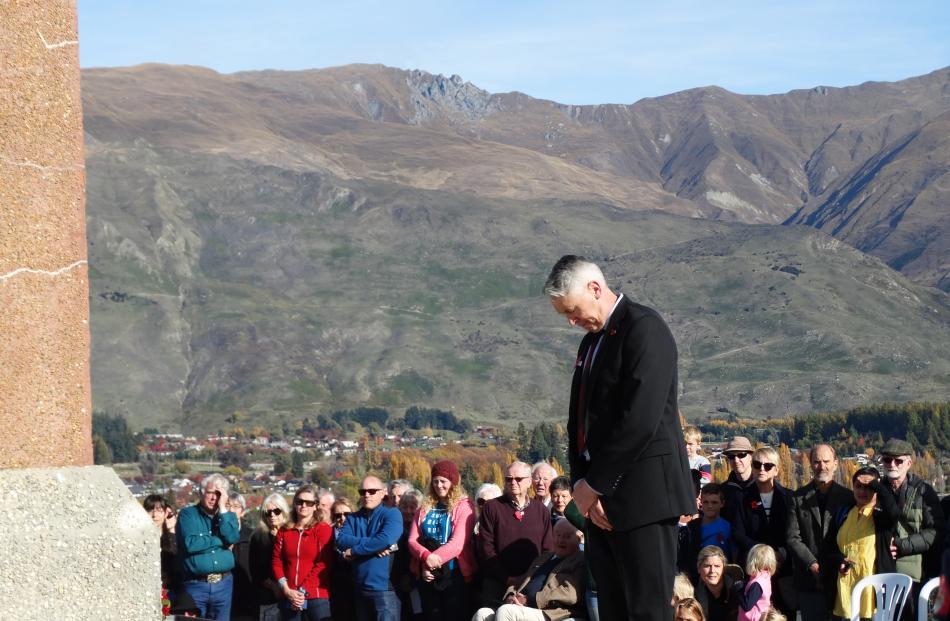 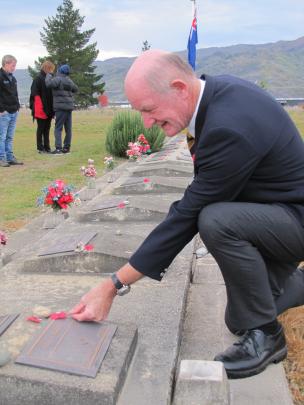 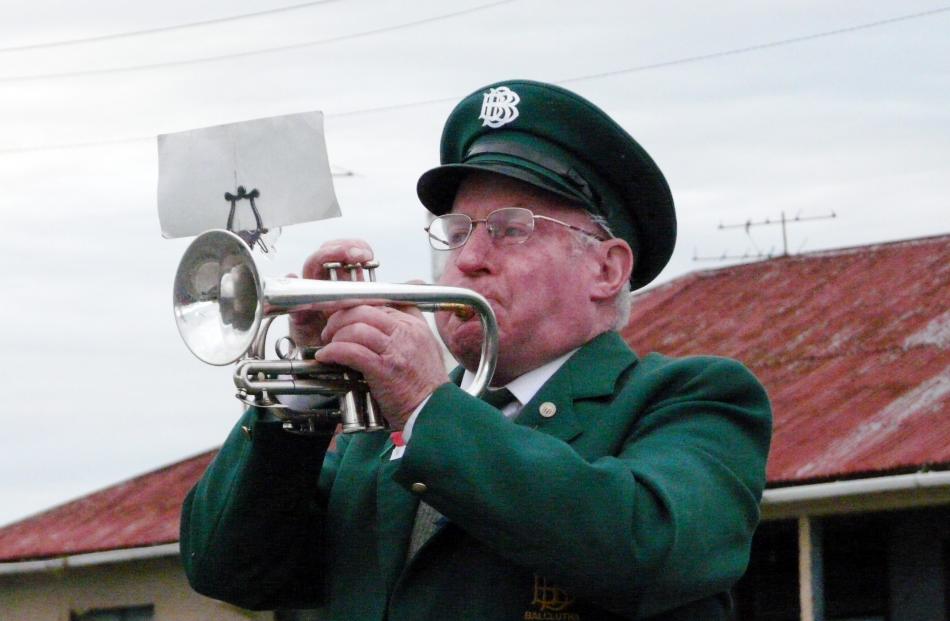 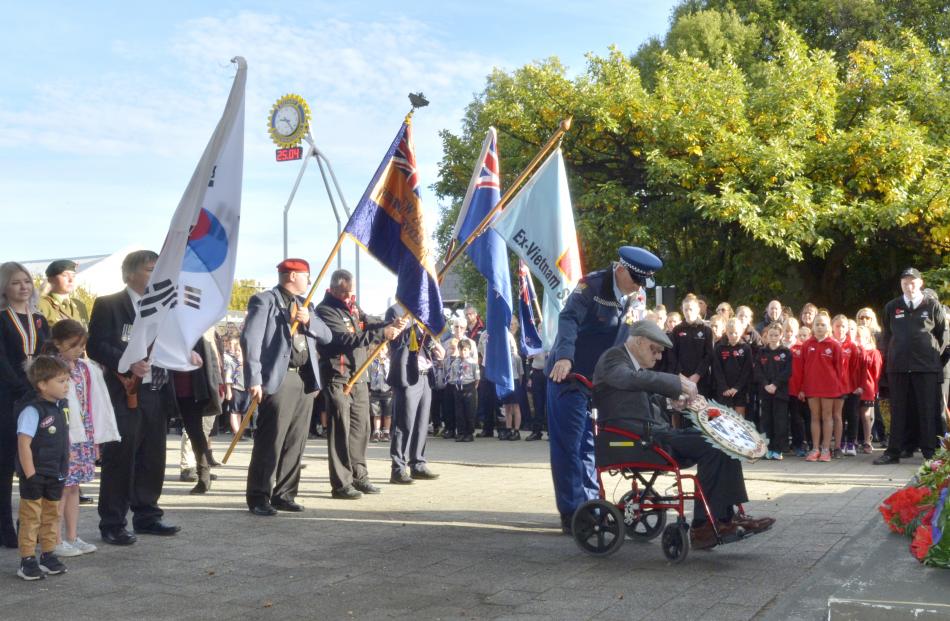 Senior Sergeant Brian Benn, of Dunedin, and his father-in-law Alan Anderson lay a wreath during the Mosgiel Anzac Day service. Mr Anderson (95) is believed to be the last survivor of the Otago Mounted Rifles. Photo: Gerard O'Brien 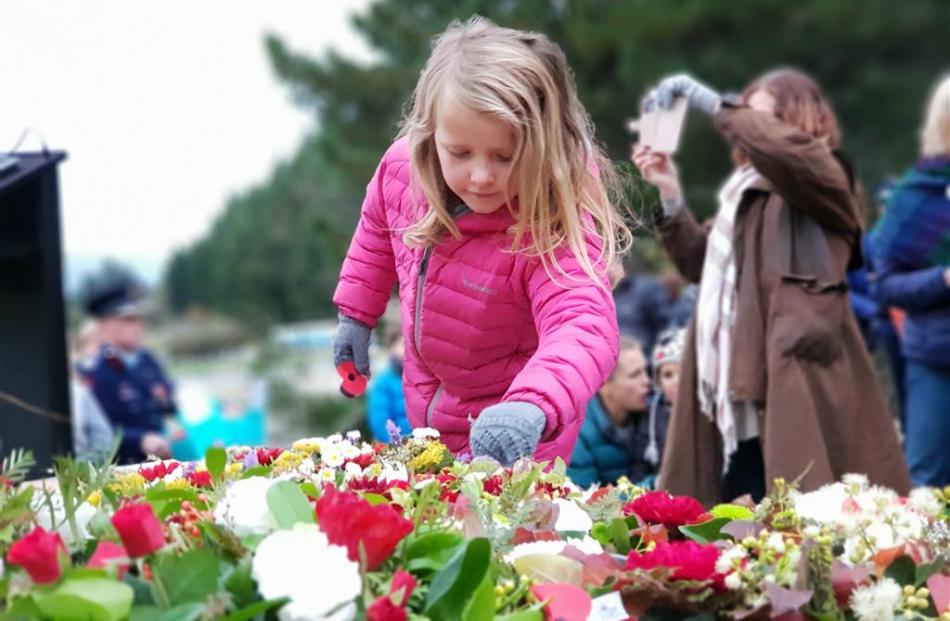 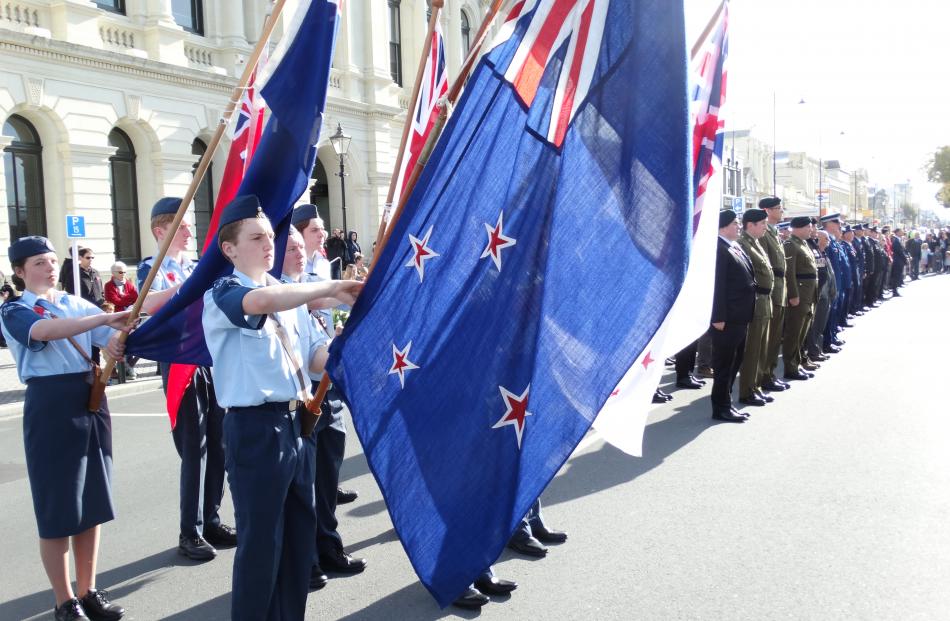 Members of Oamaru 26 Squadron of the Air Training Corps fly flags during a parade from the town’s Boer War Memorial to the North Otago Returned and Services Association Garden of Memories as part of Anzac Day commemorations. PHOTO: DANIEL BIRCHFIELD

Crowds turned out around Otago yesterday for parades and services to honour those who served in New Zealand’s armed forces.

Our reporters were there.

In Central Otago, thousands turned out for services in towns throughout the district.

Dawn services were held in Gimmerburn, Millers Flat and Clyde, it being only the second time a dawn service has been held in Clyde.

The first was in 2014, the services commemorating the 100th anniversary of the beginning and end of World War 1, Alexandra-Clyde RSA president Kevin Harding said.

Rounds were fired from a 25 pounder artillery piece at the Clyde dawn service and at a second service held in Clyde later in the morning, and the Alexandra service.

More than 1000 people attended the Alexandra service, which also featured a flyover from a replica WW1 Fokker.

A graveside service was also held at the Cromwell cemetery, where Cromwell RSA members placed poppies on the graves of returned servicemen.

It was the first time an Anzac service had been held at Lowburn. It featured a flyover from three Tiger Moths, which dropped 17 poppies in honour of the 17 soldiers from the Lowburn district killed in WW1 and WW2.

Balclutha Pipe Band drum major Graham Powell led the assembled crowd from Balclutha War Memorial Hall to the town’s cenotaph, to the strains of the bagpipes.

Anglican vicar the Rev Dr Peter Ross led the service, with musical contributions from members of local choir the Phoenix Singers and the Balclutha Brass Band.

South Otago High School head girl Briar Mills (17) shared with the crowd her changing perception of Anzac Day as she had grown up, from ‘‘fun day’’ to opportunity for reflection.

‘‘When I was younger, it used to be a fun day when you ate Anzac biscuits at morning tea, and saveloys after the parade at lunch,’’ she said.

‘‘But as you approach the age of those who served as young men, it becomes a sober day, when you pay the greatest respects to their many sacrifices with gratitude.’’

Bugler Warrick Thomson played a poignant Last Post and reveille before poppies were laid at the cenotaph by members of the public.

‘‘From what we’ve heard, numbers have been up there with last year, so we’re very pleased.’’

Anzac Day commemorations were a community affair for many Otago residents yesterday, as small services around the region proved popular.

Hundreds turned out for the citizens’ service at 9.15pm in Gordon Rd, Mosgiel.

No 42 City of Dunedin Air Training Corps cadet Nikolas Kalmakoff said he was a veteran of five Anzac Park services, and said this year was ‘‘one of the best turnouts’’ he had seen.

Down the road in Outram, Rosy Posy Sewing Room owner Maria Winward lauded the poignant service and parade, where local man Eric Hyslop delivered an address describing life in the community when ‘‘the postman delivered letters telling people their sons had been killed in the war’’ during World War 2.

The Middlemarch parade/service at the town’s war memorial was an eclectic occasion, according to Strath Taieri community board chairman Barry Williams.

‘‘There was good participation from locals and rail-trailers,’’ he said.

A small service at the Portobello Museum and Historical Society took place at 9.30am, while the Macandrew Bay Hall was packed for a later service at 10am.

Almost 300 attended a Brighton Domain service, and about 50 at Taieri Mouth.

Services at the Waikouaiti Hall and the Waitati Cenotaph were also held to remember locals who served and did not return. 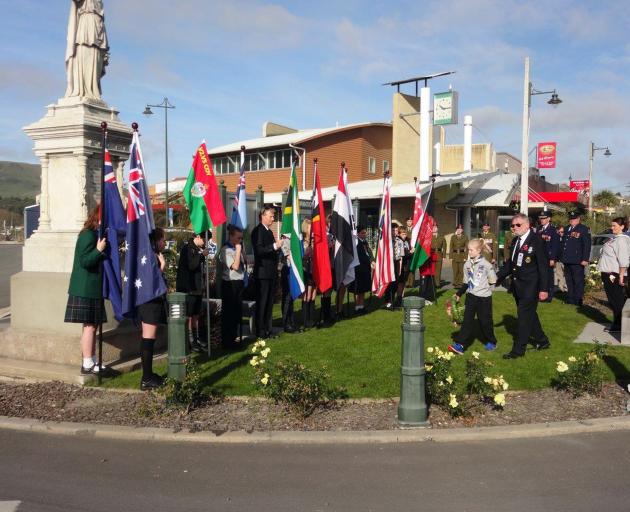 Paige Walker (10), of Palmerston, and Palmerston RSA president Tom Price carry a wreath to be laid at the Zealandia monument in the Palmerston town centre. PHOTO: BILL CAMPBELL

Mr Price said the RSA branches did not have records showing where ex-service people lived and needed them to get in touch with their RSA branch.

He said 75% of New Zealand veterans with mental health problems were under the age of 45.

Nationally the RSA was working with other agencies to ensure those veterans got the care and support they needed.

The increasing numbers of people attending Anzac Day services could encourage service veterans to join the RSA, he said. 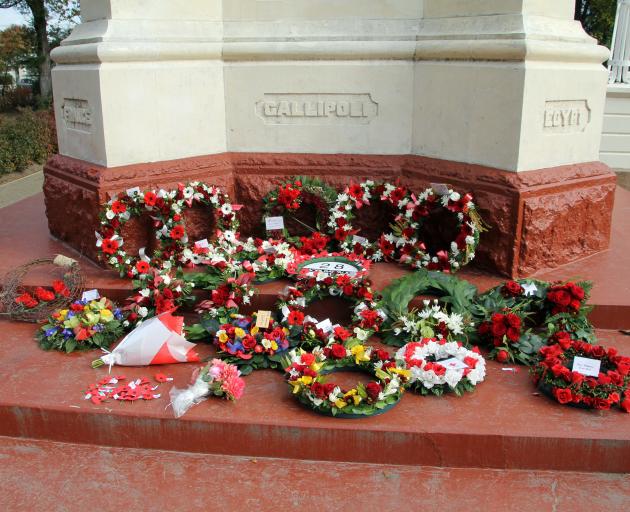 A selection of the numerous wreaths laid at the Gore Cenotaph Memorial where the 100th service was held. PHOTO: ASHLEIGH MARTIN
Gore

Anzac services were well attended in the Gore area this year, with 15 held across the district.

The weather played its part with a calm, sunny day for commemorations.

The Gore dawn parade was the 100th Anzac Day service to be held.

Gore RSA manager Steve Brinsdon said the service was attended by about 2000 people.

‘‘It went perfect; everything went just as it was planned,’’ Mr Brinsdon said.

Riversdale also had a great service with about 340 attending.

Acting chairman for the day Billy MacKay said guest speaker Nola Kilpatrick shared a great story about her grandfather, Frank Elliot, who was involved in the Battle of Passchendaele.

Chairwoman of the Heriot service Gloria McHutchon said more than 230 people attended and many wreaths were laid.

‘‘It was a lovely service and Hamish Walker spoke well about returning service personnel and we had lots of young people involved, too,’’ Mrs McHutchon said. 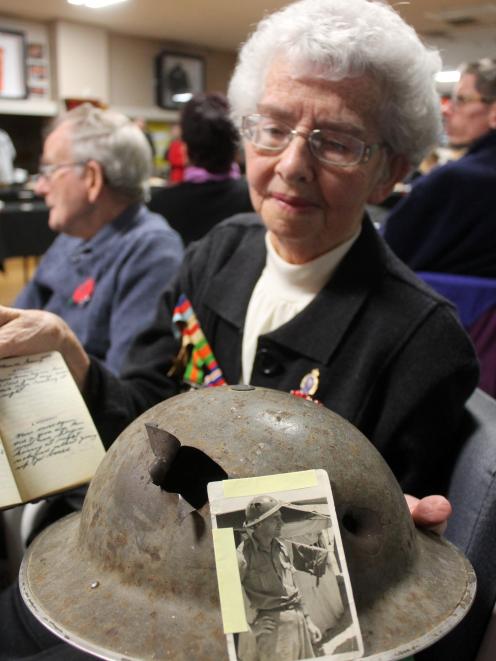 The steel army helmet on a table grabbed the attention of passers-by.

Although the entry point where the bullet penetrated was small, the bullet’s exit had peeled the metal back into a curl.

The helmet was worn by George James Kennedy of the 2nd NZEF’s 23rd Battalion during World War 2.

His daughter, and only child, Carol Cosgrove took the helmet to the formal civic ceremony at this year’s Anzac Dawn Service at the Invercargill Workingmen’s Club. Mrs Cosgrove said her father was in the desert in Egypt for three months when the bullet came close to ending his life.

‘‘He had long, strong, curly hair, and didn’t have the chin strap on, which probably stopped him from getting his neck broken from the impact,’’ she said.

Invercargill city councillor Leslie Soper said she was pleased so many young people had turned up to the dawn service at the Invercargill Cenotaph earlier in the day.

‘‘We say that we will remember them [the servicemen and women], and the fact there were so many families with so many young people shows that we do.’’

Large turnouts with high numbers of children and young people were the feature of yesterday's Anzac Day services around North Otago.

About 1000 people gathered for Oamaru's dawn service at the World War 1 memorial in lower Thames St.

A smaller number, about 400, attended the town's main service which started with a parade from the Boer War memorial and ended at the North Otago Returned and Services Association Garden of Memories.

About 200 attended the 9am service at Maheno, south of Oamaru.

Other services around Waitaki were also well attended.

The mood at Oamaru's services was sombre and reflective.

In his address at the dawn service, Oamaru man George Berry spoke of the large number of people from North Otago who gave their lives in both World War 1 and 2, conflicts he described as being on a scale not previously seen.

Record numbers turned out in fine weather in the Wakatipu to mark Anzac Day.

About 1000 gathered for the dawn service at the Queenstown War Memorial at 6.45am. The speakers included Australian High Commission second secretary Anna Brown, who said New Zealanders and Australians should always remember to ``reflect on our freedom and to never forget what it cost others so we could be where we are today''.

Hundreds more watched the parade from the War Memorial to the Queenstown Memorial Centre, where the main Anzac service started at 10am.

At the Arrowtown service, about 500 people filled the Athenaeum Hall, while at least another 300 stood outside listening to the proceedings.

The New Zealand Youth Choir performed at the service, while the speakers included Wakatipu High School pupil Leah Kissick (17), one of two winners of the Queenstown and Arrowtown RSA speech competition.

In Glenorchy, about 200 people attended a service at the village's war memorial, where residents Elaine Kirkland and Sue Scott spoke about different aspects of the world wars' historical connections to the village.

Similar numbers turned out to the civic service and wreath-laying ceremony later in the morning, which started at the Lake Wanaka Centre and finished at the Wanaka War Memorial.

Royal New Zealand Navy Commander Lyal Cocks led proceedings in Wanaka and was impressed by the turnout from the local community.

``I suppose it does reflect our growing community and also I believe there's more and more young people getting involved in this day of remembrance, which is great for our country and great for our community.''

He said the theme for this year's services was ``wounds that don't bleed'' and the effects of war on mental health.

He believed Mount Aspiring College pupils Max Hall and Sonya Palmer (both 17) summed it up best when they spoke at the civic service.

``The battle we face today is of mental health and this modern-day war claims the lives of millions of people everywhere. Let us remember the soldiers who battled for us and let us remember the people who are fighting their own battles around us,'' Sonya said.