World War 2 veteran Allan Hagan (99) and his wife Hazel spending their first Anzac Day at Ross Home, Dunedin, rather than the Waikouaiti RSA. PHOTO: GREGOR RICHARDSON
Allan Hagan was born just seven months before the end of the ``war to end all wars'' - World War 1.

Twenty four years later, while milking the cows on the family dairy farm at Waikouaiti, a letter arrived in the post.

``My brother Jack had already gone.

``They weren't thrilled about it, but they accepted that this was just the way it was.'' 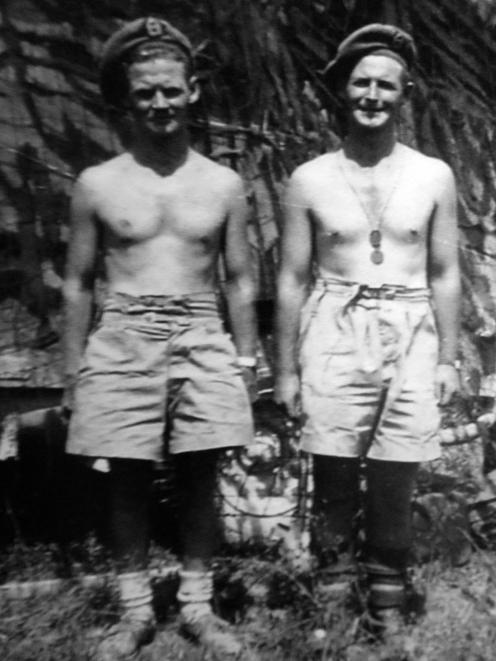 Jack and Allan Hagan, in Italy during World War 2.
Mr Hagan will be 100 years old tomorrow.

Ill health kept him from his normal Anzac Day habit of attending a commemoration service at the Waikouaiti RSA.

He passed the day at Ross Home with his 92-year-old wife Hazel.

The couple not long ago celebrated their 70th wedding anniversary, and only at Christmas left the family farm at Waikouaiti.

``We were just so caught up in the excitement and the adventure, wondering what the journey would be like,'' he recalled in a family memoir.

Having trained as a signalman - capable of 60 words of morse per minute - he ended up seeing service in an artillery company in Italy, despite having undergone no training with guns.

``We sat for weeks on the side of the Senio River.

``Both sides in the conflict were bogged down in the mud.

``Neither had ammunition and neither could attack.''

But then, in 1945, the ``big push'' came and Mr Hagan was there when New Zealand troops helped take Trieste, to end the Allied campaign in Italy.

After three and a-half years overseas, Mr Hagan was among the troops welcomed home at the Palmerston railway station, by a ``ladies band''.

``Nothing much had changed at home, and the next morning it was back to taking the milk to the Goodwood cheese factory.''

They began courting, and in March 1948 were married at the Waikouaiti Presbyterian Church.