A remarkably youthful-looking 97-year-old stood among the throng at Queenstown's dawn service yesterday.

He has lived in his own home at Speargrass Flat for the past 16 years, where he does his own cooking and cleaning and tends a large garden. 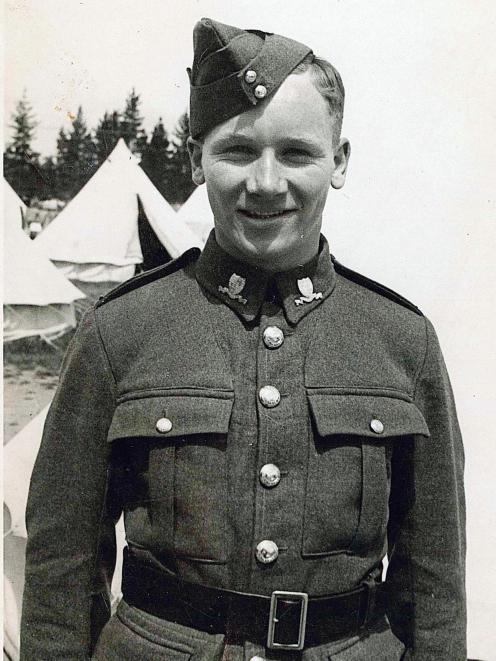 Duncan Robertson at a training camp before leaving for Egypt. PHOTO: SUPPLIED
He puts his longevity down to drinking lightly and never smoking - part of a lifestyle shaped by a sense of his own mortality.

"When I got back, I told myself `I've come through a war, I've had two near misses, so look after yourself - you don't get too many chances after that'.''

He drove armoured cars, often in a scouting role, and saw action at Monte Cassino and other notable battles.

Twice he was in hospital after being struck by shell fragments in the head and foot.

He joined the Otago Mounted Rifles in 1939, aged 17, after lying about his age. Before being shipped overseas in 1943, he worked at a Stuart St grocery store while attending regular army training camps.

Two of his great-grandchildren accompanied him to yesterday's dawn service in Queenstown, and he said he was heartened to see big crowds at Anzac services throughout the country.

"We want more Anzac Days than war days. War doesn't help anything - there shouldn't be any place for it.''

His clearest memories of the war were of the men he trained with who did not return.

"They're the ones who are indelible in my mind.''