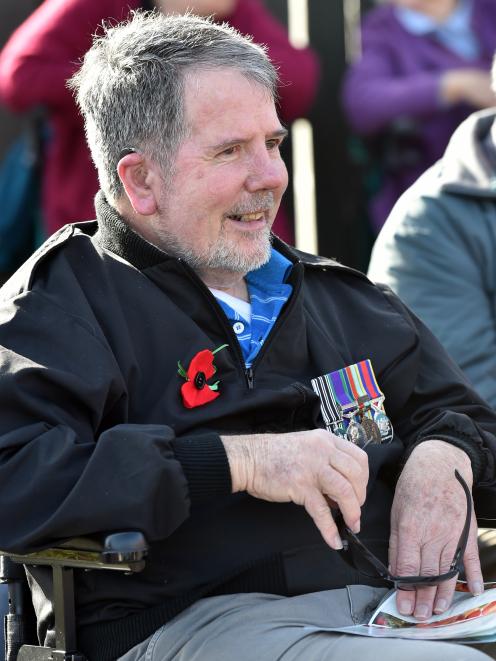 Leading Seaman Roy Miller, of Dunedin, at the Anzac Day service outside the Montecillo Veterans' Home and Hospital in South Dunedin yesterday. PHOTO: PETER MCINTOSH
"I was straight out of school and looking for adventure - and I got it by the bucket load.''

Roy Miller was just 17 when he joined the Royal New Zealand Navy, and within two years, he was on board HMNZS Taranaki, headed for the Indonesian-Malaysian confrontation in Borneo.

The violent conflict, from 1963-66, stemmed from Indonesia's opposition to the creation of Malaysia.

Indonesia's campaign of infiltration into Borneo sought to exploit the ethnic and religious diversity, with the intent of unravelling the proposed state of Malaysia.

Mr Miller (72) served six months on the vessel during 1965, as a radio technician.

``We were protecting the borders for the Malaysians.

``We were the mother ship for the Malaysian patrol boats which went up the rivers.

``There was a lot of [Indonesian] infiltration coming in and we had to protect the coast from them.''

He said the vessel did ``bombardments'' from time to time, firing on the jungle-clad coastline where infiltrators were believed to be.

``It's pretty scary standing on the deck when those guns went off.

``They're pretty loud and you never knew if someone was going to shoot back at you.''

Mr Miller was in the Royal New Zealand Navy for eight years and said apart from his marriage, it was the best time of his life.

``I loved the comradeship. I made a lot of good friends.

``It was a good life for a young man. It taught me good discipline.

``I also got to see the world - go down to the Antarctic and the Far East, places people don't normally go.''

When he left the navy, he used the skills he learned there to forge a career in the telecommunications industry.

He was one of about 400 people, many of them fellow returned servicemen, who attended the Anzac Day service at Montecillo Veterans' Home and Hospital in South Dunedin yesterday.

Thank you for your service shipmate, happy to see sailors back then enjoyed life in the Royal New Zealand Navy as they do nowadays - well its been 10 years since I left but truly loved the place and it helped shape me to who I am to day.

Once again Roy (salty sea dog) Miller thank you for your service and nothing but respect. - BZ