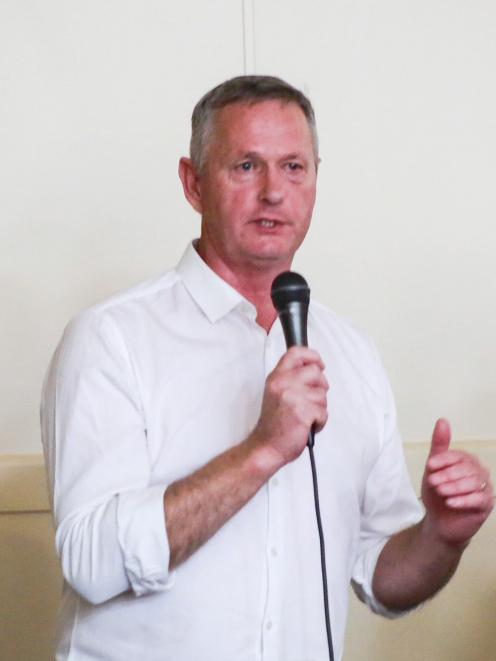 Gary Kircher. PHOTO: ODT FILES
If a decision to opt in or out of the Government’s Three Waters reform had to be made today, the Waitaki District Council would be opting out, Mayor Gary Kircher says.

"We just don’t have faith in the numbers that we’ve been given," Mr Kircher said.

Meeting yesterday to confirm the council’s feedback to the Government on the impacts of its proposed Three Water reforms on the Waitaki district, councillors raised a range of concerns about the reform process and the lack of information in front of them.

The four entities would take on a role which at the moment is the combined responsibility of nearly 70 individual councils.

A $2.5billion support package was offered to councils as part of the reform. The Waitaki District Council’s funding allocation is $14.8million.

At this stage, councils are not being asked whether they want to opt in or out of the proposed changes, but to consider the proposals and set out areas of concern or where proposals could be improved.

Concerns the council agreed to raise with the Government included the "flawed and likely overstated" financial case for change; the projected efficiencies under its preferred water services delivery model; the proposed governance model not clearly indicating how the voice of communities would be heard; and the aspiration to connect all individual households across New Zealand, urban and rural, to a reticulated water and wastewater system.

Councillors agreed there had been insufficient information and too many unknowns presented about the Government’s desired future model, and insufficient time for officers and elected members to digest how it would affect community wellbeing and the local economy.

Last month, the Otago-Southland and Canterbury mayoral forums sent letters to Local Government Minister Nanaia Mahuta asking the Government to pause its reform programme, because communities would not be able to make informed decisions without more time.

Mr Kircher, who is a member of both groups, said there had been no response to either request.

"The crickets are chirping.

"That has been disappointing silence from Wellington on that particular topic," he said.

"Equally, my own requests to meet with the minister haven’t had a response as yet.

"So it’s disappointing, because there’s been a lot of engagement along the way, and I felt it was good opportunity to actually talk in more detail about why councils are asking for a pause, but we haven’t heard a thing."

Responding to questions from the Otago Daily Times, a spokeswoman for Ms Mahuta said the minister received a lot of requests and had been working through them.

She would meet both mayoral forums, the spokeswoman said.

Ms Mahuta said councils had received "considerable information and analysis on the reform proposals and what this means for them".

"This includes details of the Government’s $2.5billion financial support package, and shows that all communities and ratepayers are better off under the reforms," she said.

There was no expectation for councils to respond to the request for feedback at present, she said.

"This is not a decision-making process for councils and there is no requirement for formal community consultation at this point.

"The Government is gathering feedback throughout and following this period of engagement will make decisions on next steps in the reform process including mechanisms for community consultation.

"This is a long-term intergenerational programme. It won’t happen overnight. The current proposals provide for at least three years to work with councils and communities on the finer points of the reforms."

Mr Kircher said there was a case for change on the basis that not all parts of the system that delivered Three Waters services had worked together well in the past, and to achieve better environmental outcomes.

"But it’s not necessarily the change is being prescribed."