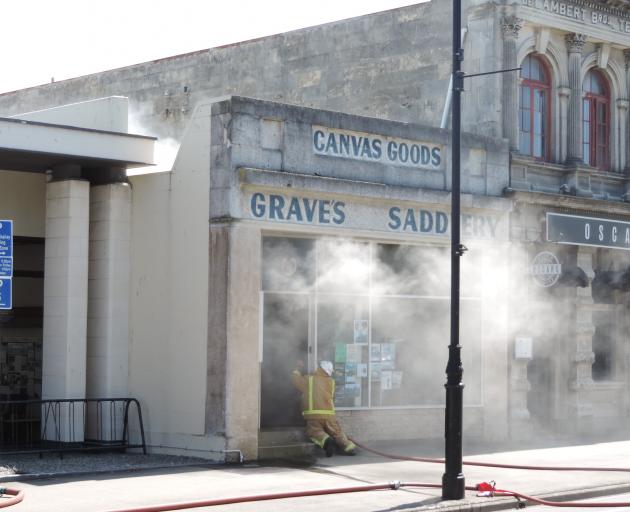 Nobody was injured as fire crews responded to a fire at Grave’s Saddlery on Oamaru’s Thames Street yesterday. PHOTO: ASHLEY SMYTH
The owner of a historic Oamaru saddlery is counting herself lucky after a fire ripped through the business yesterday.

Three fire crews were called to Grave’s Saddlery in Thames St, when the switchboard caught fire at 1.15pm.

The fire damaged the southern front end of the then-unoccupied shop, including stock shelves, and part of the roof was burnt.

While it was an upsetting situation, owner Jill Renton said it could have been so much worse.

"It’s really, really lucky that it happened how it has. No-one was in there."

She was at an appointment when the fire started, and a member of the public notified emergency services of the blaze.

"It was very, very lucky that somebody spotted it. It was at lunchtime, if that was in the middle of the night — that would have been gone."

Residual-current devices were fitted on all switches inside, and she was careful to turn off all equipment when leaving the store, she said.

The fire had not touched the workshop out the back, and she would still be able to do some work from there.

An assessment of the damage was expected to take place over coming days.

The interwar Oamaru building dates from 1923 and Ms Renton took over from her father five years ago.