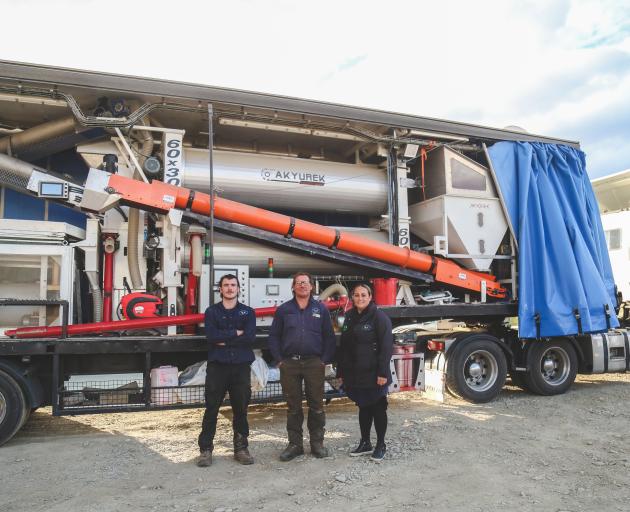 When Johnny Neill was first approached to build a mobile seed cleaning machine, he had no idea what it was.

Fast forward 20 years, and the world is watching the Oamaru man making advances in mobile seed cleaning that no-one ever imagined were possible.

Mr Neill grew up on a dairy farm on the Taieri Plain and finished his secondary school years at Waitaki Boys’ High School. After a stint in dairy farming, he moving to the North Island, where he trained as an engineer and met his partner Kim Lyttle.

When the couple moved back to North Otago in 2001, Mr Neill had a small engineering workshop in Alma, which he shared with a mechanic, whose father was a mobile seed cleaner and approached Mr Neill about building him a new machine.

"When he approached me to build it, I didn’t even know what he meant," Mr Neill said.

With some guidance, Mr Neill built the seed cleaning machine out of secondhand materials and ran it himself for a couple of weeks, to see if there were any problems.

"Then I just fell in love with what it was about," he said.

"And I saw massive potential for it, with a bit of young blood."

So, he bought the business, and has been on a "crazy" journey ever since.

For the first 15 years, J W Neill Mobile Seed Cleaning and Screening was a part-time business for Mr Neill. He went seed cleaning for about three months of the year, and continued to work for other people and in engineering and mechanics in the off-season.

Because the seed cleaning machine was made out of mostly second-hand parts, it broke down regularly, and as the business got busier, he started to look for ways to improve it.

"I just learned that if I wanted a future in it, I need to stop spending all my money on repairs and maintenance," he said.

He had heard of advances in mobile seed cleaning technology in the United Kingdom, and with about $5000 in the bank, managed to make a 12-day trip to England fit his budget.

He spent a lot of time looking at machines at a big field days in the UK, and after also investigating what was being done differently in the industry in Australia, he knew he could incorporate all of their ideas into one machine, with his own personal touches.

"And that’s where the whole dream started I suppose."

He ordered the gear and got to work building his first machine, with the support of Ireland Engineering in Oamaru. Not everything worked the way he had imagined and it cost a lot more than he had initially thought it would, but he kept finding ways to redevelop things and was glad he had invested in top-quality gear. 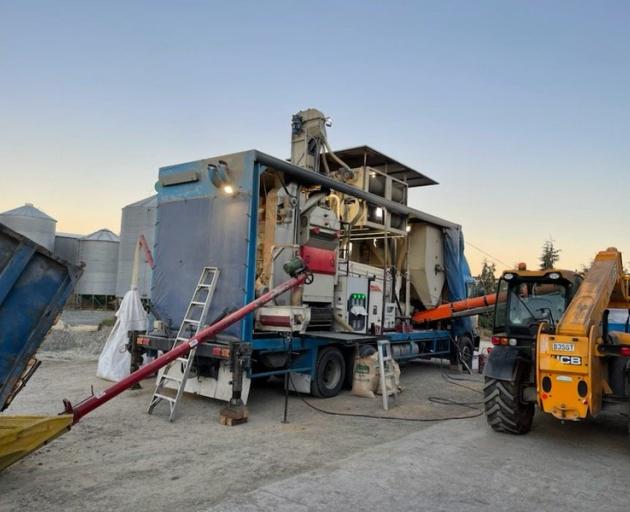 The first mobile seed cleaning machine in action. PHOTO: SUPPLIED
When he finally completed the first machine five seasons ago, there was no work for it — he had missed the peak of the season.

Canterbury had a bad year for milling wheat for bread, and the only way to get it up to standard was over a gravity table, which separates seeds based on density.

Most other gravity tables in New Zealand were small, and no-one could do the work for the right money. Mr Neill’s table was bigger, so he got called up to Canterbury see if his machine would do the job.

"It took us a while to get it tuned, but once we did, I was up there for months," he said.

The job was not worth a lot of money, but word started to spread about what his mobile seed cleaning machine was capable of.

"And that’s where it really took off."

From his Awamoko base, he started travelling from farm to farm across the South Island to clean and treat cereal seeds — such as wheat, barley and oats — and as business continued to grow, it was "inevitable" that he would build a second machine, which would also enable him to get more work across the South Island. The potential for growth in Southland, in particular, was "massive".

He also wanted to have his own manufacturing workshop for seed cleaning and private engineering work in Awamoko.

Mr Neill and Ms Lyttle, who takes care of all of the administration and bookwork for the company, weighed up the cost of paying another company to help build the second machine and the cost of travel, against investing the money in establishing their own workshop.

After crunching the numbers with a business consultant, they decided to go for it.

It took Mr Neill three years to finish the second machine after ordering all the gear, and it was finally commissioned in January.

But it was worth the wait. The second machine is fully automated and much bigger than the first, able to process 8 tonnes an hour.

The software was designed by a "super sparky" from Des Scott Electrical in Waimate, and "hundreds and hundreds" of hours went into its programming.

"I always had a dream of having these machines with touch screen computer screens," Mr Neill said.

"It cost us a lot of money to design it, but it was just another goal of mine and it makes life easy for our boys."

Johnny Neill’s second mobile seed cleaning machine incorporates both gravity tables and cylinders. PHOTO: REBECCA RYAN
There was lot of interest locally in what he was doing — and the rest of the world had started watching his progress online.

"The way we put the machinery together, no-one else in the world had done it," he said.

"Now the Poms have seen what I’m doing, they’re going to change their rigs."

It had been a "massive" financial commitment to build the second machine, but Mr Neill was glad he did not cut corners and had invested in the best possible gear.

"Because it’s developed our business. It’s getting bigger fast, but the potential is there to keep growing."

When Mr Neill started in the industry, his business covered South Canterbury, the Hakataramea Valley and North Otago. The rise of dairy conversions had "obliterated" business in North Otago, but it was still a good, central base — with the business now covering everywhere from North Canterbury to Southland.

And the work keeps coming. While the season would normally have finished about six weeks ago, both the machines were still going at present.

While Mr Neill spent a lot of time in the workshop these days, he still enjoyed getting out on the road and loved the relationship he had with clients, most of whom had become "bloody near family".

He was also proud to have built up a team of six staff — engineers, mechanics and seed cleaners — at his Awamoko headquarters and would be looking to hire another seed cleaner in the future, anticipating a big 2023 autumn season.

Mr Neill and Ms Lyttle have three children. Their son, Hoani (20), joined the business in January as a second-year apprentice engineer.

Now age "41ish", Mr Neill wanted to continue to build his empire for the children to take over, if they wanted to. A third machine was "definitely" something he would be thinking about a lot over the coming months.

Because of the international interest in what he had created, and the connections he had made, there were also opportunities for him to travel overseas and do research and development for companies around the world. He hoped to be able to do that in about 10 years’ time, giving Hoani the opportunity to take the business in his own direction.

Mr Neill had always dreamed the business would grow in the way it had, and said the success had ultimately come down to hard work and determination.

"It’s cool to sit back and watch it now," he said.

"And it truly is going very well, but I’m far from finished.

"I just want to keep living out the dream, which is seed cleaning."