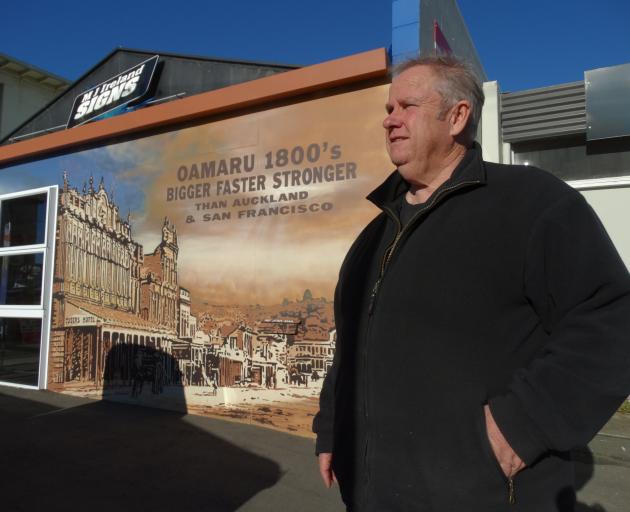 M J Ireland Signs owner Maurice Ireland outside his Ribble St business. Photo: Daniel Birchfield
It was something of an inevitability that Oamaru’s Maurice Ireland was going to make a career out of his artistic flair.

The owner of M J Ireland Signs in Ribble St, the business he established in 1977, may have seen plenty of changes in the signwriting industry over the years but one thing is for sure — Oamaru has always been home and always will be.

Born and bred in Oamaru, Mr Ireland (62) was educated at Waitaki Boys’ High School, where his creative bent flowed.

"I was pretty arty; that was probably one of my strengths," he said.

"The rest was just sort of middle-of-the-road. I enjoyed my whole time at school right through. I had to do another year to get a apprenticeship in Dunedin, which worked out all right because I worked really hard for my first year of school cert and missed out. The second time around ... I absolutely flew through.

"I thought signwriting was a really good outlet. I had watched guys with brushes doing pictorial work so that was hugely inspirational."

At the age of 17, Mr Ireland took on an apprenticeship at Dunedin company Miller and Co.

A couple of years later he had a job lined up in Christchurch, but, quite literally, never made it to the Garden City.

Instead, he did what few people at the time, and arguably today, did — he left Oamaru to study and then returned.

He set up shop in Regina Lane, before  eventually relocating to Oamaru’s central business district.

"I just worked out of my father’s joiners shop. If you had someone come and see you, you were 100% guaranteed a job ... there was no mucking around. You were just into it and you did it."

In his early years in the industry, he thought the technology used was unlikely to change.

He freely admits he was wrong.

"In the industry at the time, my idea of it was there will be no computers involved — it was going to be really good and something else you didn’t have to learn. It turned out to be one the most computerised industries out there."

Mr Ireland said computerisation and the introduction of vinyl cutters were the two biggest changes by a long shot.

"It was a hard sell in the early years. The cost of the equipment was astronomical. I could have bought two houses in Kakanui for what I spent on my first computer system. It was a really hard sell getting people across to vinyl. The mindset was it was just like Sellotape so it’ll never last.

"Another big change was, back then, we were our own graphic designers and somewhere along the way the loop’s been forgotten that we used to design our own work."

While there was still demand for hand-painted signs, most work was computer-based.

That made it far easier to create signage for vehicles, for example, he said.

However, Mr ireland still loved the feeling of a brush in his hand.

"I still really love time with the brushes. It’s time out. There’s just something about it. But, for bread and butter work, you’ve got to use the technology."

Mr Ireland said the ideal sign was something that looked attractive first and foremost, that did not contain an overload of information.

"There’s a lot of signs that get put up that have so much information on them and they just miss the point completely. It’s like the inside of a book, but you only need the cover."

Some of the favourites he has created over the years include the wall at Rainbow Confectionery, the sign above the Criterion Hotel and the Fizzacool soft drink sign that used to adorn a building on the corner of Wear and Humber Sts.

They are examples of signs that have won the company about 20 New Zealand Sign and Display Association national awards — four of which came this year, including gold for the sign created for Big Rooster Antiques in Omarama.

"You’re judged by your peers.

"There are lots of companies that put things in year after year and never get anything ... it’s very satisfying."

The company is also recognised as one of the association’s few master signmakers — one of only 17 nationwide.He felt the future of the industry was bright and hoped to one day focus on allowing himself some more spare time.

"I love being out on the boat fishing, but there’s not much time for that."