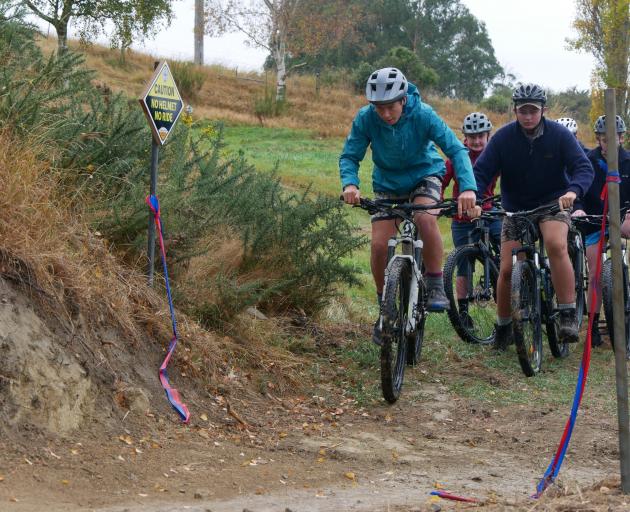 Kelvin Benny (15) leads a group of pupils who christened the new mountain bike track at St Kevin’s College on Saturday. PHOTO: RUBY HEYWARD
On your bike.

That is where St Kevin’s College pupils will be after the official opening of its mountain bike track.

Since last November, 40 pupils have worked tirelessly to prepare the track for the opening on Saturday morning.

It was built behind one of the school’s hostels on Service Hill after it was cleared of pine trees.

Assistant principal Jo Walshe said the school wanted to transform the clearing into an asset for its pupils, rather than leave it without a purpose.

Principal Paul Oslen said the area had many uses over the years, from grazing cows, alpacas and horses, growing pine trees and even as a dump.

He said it had never been given a clear purpose and was put on the "too-hard list because of its steep nature and clay make up".

But the latter qualities were the very things that made a good mountain bike track, he said.

He praised the pupils for their hard work.

Mr Olsen said it was an "absolutely superb development ... that pupils will look at for years to come".

"They can be truly proud of working and achieving such an awesome result."

Mr Olsen described the track as a community asset that everyone could enjoy.

Waitaki Mayor Gary Kircher, who cut the ribbon to the track said it was great to have another attraction added to the North end of Oamaru.

"This is the type of project that makes Waitaki a better place to be."

Also in attendance were members of the North Otago Tree Planting Association who were assisting the pupils in planting in the area.

There were plans to plant native trees along the track as part of the next phase of the Service Hill development starting in early May.