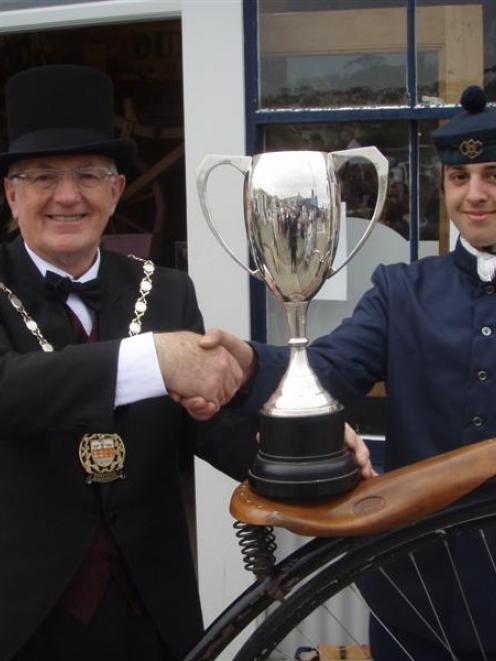 Mitchell Fox (13), of Oamaru, became the youngest holder of the title on Saturday at the 17th National Penny and Veteran Cycle Championships in Oamaru's historic precinct.

"Junior wheelman Fox demonstrated determination and persistence as he pushed his big wheel at breakneck speed" to head off a highly competitive field, Mr Wilson said.

"It is a great honour for Oamaru to now hold this prestigious title, being the host town of the event since 1994, and having one of the youngest members of the OOCC showing so much potential is a double privilege," Mr Wilson said.

Mitchell, a "fit young man with great speed" who had been riding for less than two years, had his talent spotted at a race meet in Waimate about a year ago, Mr Wilson said.

Mitchell's mother, Pat Fox, said her son loved to ride, but had been unable to do so prior to the racing due to a problem with the back wheel of his penny-farthing.

Mr Wilson believed Mitchell should target the Australian Penny Farthing Championships in Tasmania in the next couple of years. After that, the sky might very well be the limit.

"I believe that he has the potential to become one of the fastest in the world," Mr Wilson said.