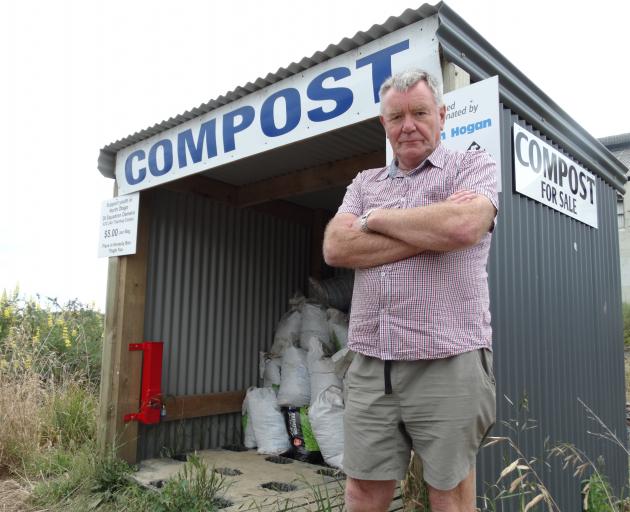 Derek Beveridge, 26 Squadron Air Training Corps unit commander, at the squadron’s compost stall, which has been targeted by thieves. Photo: Daniel Birchfield
Ongoing thefts from a fundraising stall set up to support members of the local Air Training Corps has left the organisation angry and disappointed.

For about a year, 26 Squadron  Air Training Corps has had a compost stall near the intersection of Humber and Wear Sts, where people can buy bags of compost for $5, paying via a donation box.

Since the stall had been open,  the secured box had been broken into four times,  money having been taken on some of those occasions, 26 Squadron unit commander Derek Beveridge said.

In one instance, several hundred dollars was taken.

The latest break-in happened on Thursday night or  early  yesterday, but those responsible got away empty-handed after breaking the box’s padlock and damaging its door.

The box was empty at the time, having been emptied on Thursday evening.

In addition to money being taken,  more than 20 bags of compost had  been stolen over the past several days, Mr Beveridge.

"The thing that really concerns me is the amount of compost that gets stolen from it. In the last week, there’s been 23 bags that have been stolen. Every week compost goes missing and we are being shortchanged.

"To say the least, I’m right p... off that anybody would in fact steal from a volunteer organisation trying to raise funds for the youth of the town."

People were spotted loading bags of compost that had not been paid for into red and blue cars about 2pm last Saturday, he said.

However, some of that "hard-earned" money would now be spent on at least one security camera, Mr Beveridge, a former police officer, said.If the thefts continued, the squadron would consider abandoning the stall.

"We are still keeping our head above water, but if it keeps up we will have to scrub it."

The thefts have been reported to police.