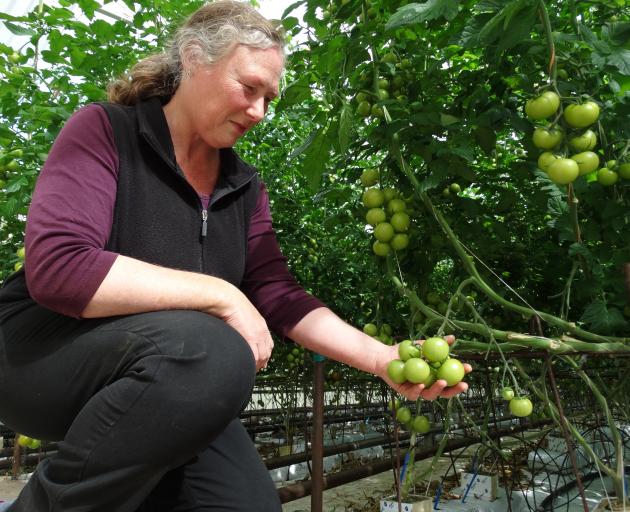 Kakanui Tomatoes co-owner Deborah Grant inspects the vines stripped of ripe fruit at her Kakanui business near Oamaru yesterday. PHOTO: DANIEL BIRCHFIELD
Deborah Grant expected to be met with bursts of red when she unlocked one of the greenhouses at the growing business she owns with her husband Callum this week.

Instead, she was met with the sight of unripened tomatoes hanging from the vines.

Mrs Grant said she knew something was amiss as soon as she unlocked one of the large greenhouses at Kakanui Tomatoes, that housed a variety of high-value cocktail tomato.

"All the trusses were clear. The tomatoes were green and not red.

"To be honest, I was horrified. Utterly horrified that someone would come into our home and property. We have our house here."

She believed it was the work of a group of "professionals", who likely cased the property before they targeted it.

"I have been doing it [picking] for quite a few years. They were expert pickers. They left no tomatoes on the floor. They knew what to pick, where to pick and how to access the property."

It was the fourth time the property had been hit in the space of 12 months.

Mr Grant suspected the alleged thief or thieves bought tomatoes early this week, walked into one of the greenhouses and unlocked a rear door before returning to commit the crime.

Like him, Mrs Grant was disgusted at the level of premeditation she believed was shown.

"You should be able to trust people ... It's just disgusting. Are they going to come back and do something else?"

Given the high value of the fruit, she suspected it was stolen to order.

Mr Grant advised growers in the are to be vigilant about security and to report any suspicious activity to police and fellow growers.

Mrs Grant said there was only one positive to come out of the incident.

"It shows our tomatoes must be good."

Police conducted a scene examination yesterday and inquiries are continuing.