From top Kiwi band to life in 'magical' town 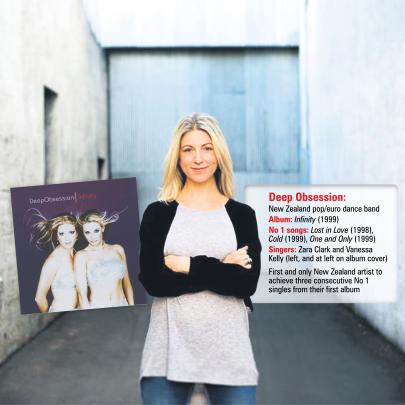 Vanessa Kelly-Brown was one of the front singers of Deep Obsession, which made New Zealand music history with three consecutive No 1 hits. She has toured internationally, opened for Boney M, Hanson, S Club 7, Vengaboys and Five, appeared in Shortland Street and Xena: Warrior Princess, and for the past eight years has been living in Oamaru. Rebecca Ryan caught up with her this week.

Life in Oamaru is a world away from being at the top of the New Zealand music charts and touring internationally.

But for Vanessa Kelly-Brown, there is something ''magical'' about living in the North Otago town.

Kelly-Brown (39) grew up in Auckland and graduated from the National Academy of Singing and Dramatic Art in Christchurch in 1996.

Deep Obsession first emerged in 1998, as Zara Clark and Kelly-Brown were brought together by producer and keyboardist Chris Banks.

The band started to attract interest after its first gig, a More FM boat cruise around the Auckland Harbour.

''We started working at More FM studios at night-time, from midnight to about 5am some mornings, just writing and getting plans together,'' she said.

''We ended up getting on the radio before we had a record deal ... That's how it really started for us.''

Before the band knew it, its version of Air Supply's Lost in Love was a No1 hit.

Deep Obsession became the first New Zealand band to sign with Universal and went on to write its own material.

That record still stands and the band's achievement was recognised last month at the 40th anniversary of the New Zealand Music Charts.

It toured Asia and spent a lot of time in London.

After hitting such a massive high, Kelly-Brown decided to leave Deep Obsession in 2001.

''It wasn't a great scenario, being totally honest. Unfortunately, Zara had a lot of personal issues going on in her life and it became very difficult,'' she said.

''I think probably [there was also] the mistrust in what the record company had created as well. They said in the beginning it wasn't going to last, so they set it up to fail and that was the hard part - that we didn't have that support as a unit.''

Back then, it was a difficult time for New Zealand acts to find legal representation who could be impartial to artists and take New Zealand music seriously, Kelly-Brown said.

''Now, it's an open market. Every performer has the potential as an international artist - it's an even playing field now, which is great,'' she said.

''It's such an interesting industry to be in and I think trying to keep your integrity is the most important thing and being honest about who you are as an artist because quite often the industry can push you down a pathway that they want you to go.''

The transition from Deep Obsession to being a solo artist was hard.

''You go from this scenario where everyone thinks that you're financially loaded and you're actually broke,'' she said.

But the experience had been invaluable.

''We had amazing time, we learned a lot together, we grew up together and now we're all off on our own journeys.''

She started some solo work, shifting from the pop scene to jazz and blues, and toured around New Zealand from 2005 to 2006.

From there, she moved to England for two years, where she worked with a theatre company and started songwriting again.

After returning to New Zealand in December 2007, Kelly-Brown worked at Fleur's Place in Moeraki for about 18 months before moving to Oamaru.

''There was something really magical about [Oamaru] and it was really healing as well.

''There are a lot of creative people here. It's very grounding and a great way of being able to really find yourself.''

She had planned on staying in Oamaru for three months, but eight years later she is still here.

She married John Brown and the couple have a daughter, Stella, who is 3.

In 2013, Kelly-Brown started working at the University of Otago as a contemporary music vocal coach as well as forming a the Bella Cadets, a 1930s-'40s-inspired female trio, with Kristine McGeown and Anna Sillibourne.

Now, she is very family-focused, but has recently landed a role in a feature film and is building her own business as a vocal coach and mentor.

''I'm just really happy to give advice to those who are pursuing that career,'' she said.

''When you're starting out, you really do need to have some good mentoring.''