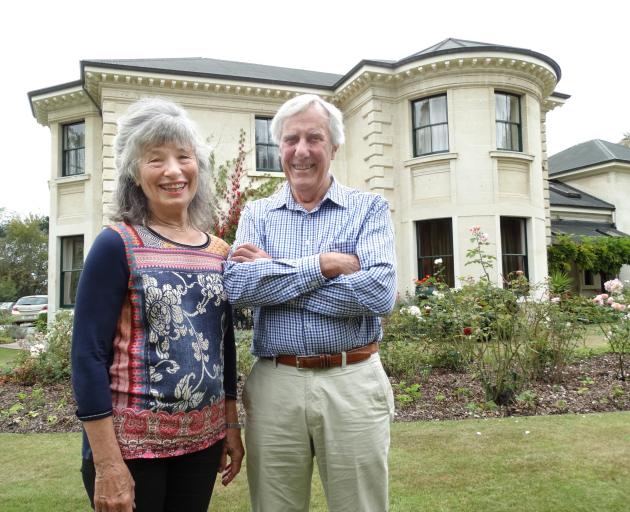 Having spent the past 48 years as custodians of the historic Totara Estate homestead, Carol and George Berry are ready to give someone else a go at looking after the 153-year-old building as they move to Christchurch. PHOTO: RUBY HEYWARD
A chapter of Totara Estate’s history is coming to a close.

After spending the past 48 years as custodians of the Totara Estate homestead, George and Carol Berry are moving to Christchurch and have listed the historic homestead for sale.

Totara Estate was established in the 1860s by runholders Mathew Holmes and Henry Campbell, who broke in the land and grazed about 18,000 sheep and 200 cattle.

The New Zealand and Australian Land Company bought the estate 8km south of Oamaru in 1866 and built the homestead in 1868.

The 18-room homestead was the main home for the Scottish-owned farming company, which pioneered New Zealand’s frozen meat shipment, and was regarded as the "gem" of its farming enterprise.

But it was no gem when Mr and Mrs Berry took over the property 48 years ago.

The Berrys moved to Oamaru after completing their tertiary studies and were looking for a simple cottage in the country, when their real estate agent asked the golden question — "how brave are you?"

Their answer turned out to be "very brave", as the couple took on the big job of returning the homestead to its former glory, while raising two small children.

"We knew it would take a lot of work because it was pretty run down," Mrs Berry said.

Among other renovations, they re-roofed a part of the house, established a garden separate to the farm, installed new bathrooms and kitchens, and replaced most of the ground floor.

"When we came out here, the sheep were grazing right up to the house," Mr Berry said.

"It’s been a long and laborious process, but Carol and I are immensely proud to have restored the homestead to its original splendour.

"It truly is a wonderful home — which is why we’ve stayed here so long. We hope the next custodian will appreciate the space and serenity we’ve enjoyed over the past 50 years — as well as its wonderful sense of history."

Only three families have lived in the homestead over its 150 years, and the Berrys hoped the fourth would enjoy their "practical" family home.

"Our hope is that it will fall into the hands of someone who will look after it," he said.

Over the years, Mr Berry also built a woolshed, new stone walls around the estate, and a sunken garden.

During their renovations, they realised the historical significance of the homestead and in 1981 gave its old farm houses to the Historic Places Trust, now known as Heritage New Zealand.

They had done a lot in the way of the practical restoration of the heritage location and Mr Berry had gone to Edinburgh to research the estate’s history.

The couple had also been instrumental in establishing other heritage sites in the Waitaki district, such as the Janet Frame house, and the Oamaru Whitestone Civic Trust.

Their decision to sell was not an easy one, but they wanted to be closer to family.

The couple had sons in London and Christchurch, and the latter would be their new home.