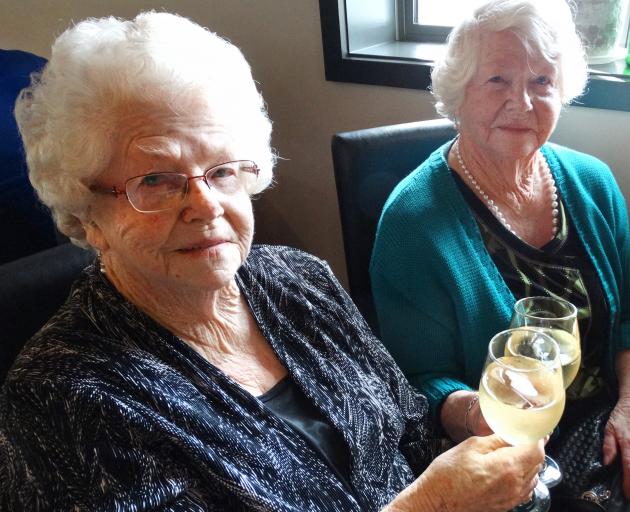 Photo: Daniel Birchfield
Unlike most identical twins, Oamaru’s Rita Fogarty (left) and Agnes Rapson had to wait a while  to use their likeness  to their advantage in certain situations.

Not that they mind too much — they have had plenty of time to perfect the art.

The pair quietly celebrated their 90th birthday with lunch at the Oamaru Club yesterday  and will have a more formal get-together with family next weekend.

The twins were born in Temuka in 1928 to  George and Veronica Phillips.

Mr Phillips was a railway worker and  relocated to Oamaru for work when his daughters were aged about 8.

However, as a child Mrs Rapson suffered from osteomyelitis, a bone infection that affects the arms and legs in children.

As a result, from the age of about 7 to 14 she was hospitalised in Timaru, Oamaru and Dunedin hospitals, before again being treated in Oamaru.

It meant she was unable to take part in sports and activities that her sister enjoyed, such as netball and marching, Mrs Rapson said.

"But I was not used to playing sport, so I was none the wiser."

That began to change as they got older.

One thing the twins enjoyed doing together was attending Saturday night dances.

It was at those they liked to perform a little bit of twin magic, Mrs Fogarty said.

"This boy would say to me ‘I would like to walk home with you’ and he used to end up with Agnes."

On another occasion,  she was asked out  by a young man and once again, her sister took her place.

She believed he never discovered the swap.

Their already close relationship had become more special over the years.

They  thought they might be the oldest identical twins in North Otago.