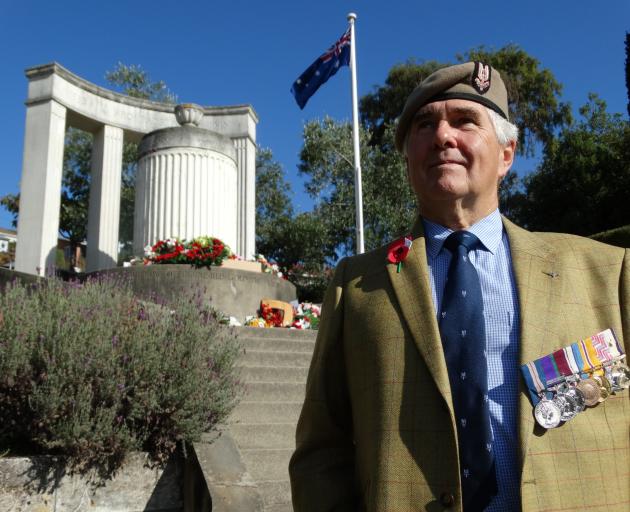 Former British SAS serviceman Tom MacDonald at the North Otago Returned and Services Association Garden of Memories in Oamaru after yesterday's Anzac Day service. PHOTO: DANIEL BIRCHFIELD
For a former British Special Air Service soldier now based in Oamaru, nothing in life is harder than visiting the graves of his fallen comrades.

He served as both a part-time and full-time soldier in the British Army's parachute regiment and the SAS from the mid-1960s until 1995, then, when based in Oman, in the Sultan's Special Forces as a training officer for the 2nd Regiment, until his retirement and subsequent move to Oamaru in 2003.

While much of Mr MacDonald's military involvement is kept tightly under wraps, he said details of the operations he has been involved in have "never been published", he was able to speak about one particular assault.

That was the six-day Iranian Embassy Siege in 1980, that unfolded when a group of six armed men stormed the embassy in South Kensington, London, taking 26 hostages.

At the time, Mr MacDonald was a sniper commander in an SAS anti-terrorist team.

"When we went into the embassy it was on five floors. My snipers were meant to contain the first floor, where I was, and the fifth floor, and the assault team were to take the middle three floors. It turned out that a couple of the terrorists had come down to the floor that I went in on. It was me that jumped the balcony and went in through the front window, myself and another three. We found the terrorists in there and dealt with them, so within 30 seconds I had gone through a window and killed two people, which wasn't really expected."

Afterwards, Mr MacDonald and his men "had a beer with [then Prime Minister] Maggie Thatcher" and her husband, Denis, who quipped: "You let one of the bastards live".

He still travelled regularly to the UK and while there, always visited the graves of 23 of his fallen comrades at St Martin's Church in Hereford.

"I tried to take my now wife and describe what happened, where it happened and how it happened ... I broke down. I couldn't handle it. So now I go alone, shed a few tears and spend time with them. It's the hardest thing I do."