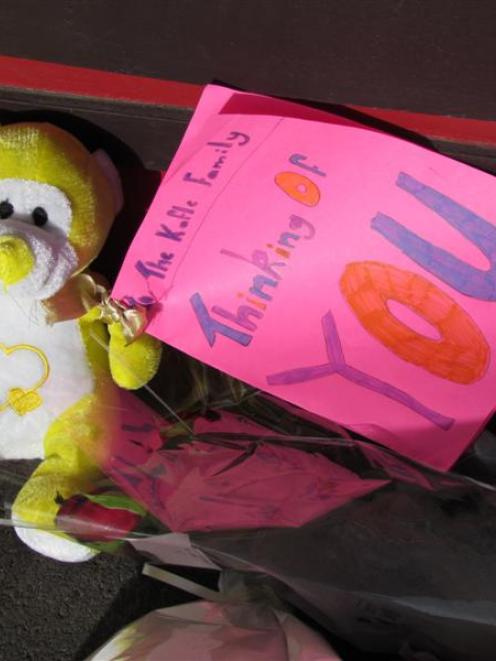 A bear with a handmade card, signed ''Thinking of You, From the Haar and Korbishley Families'', is among flowers outside the Waimate restaurant. Photo by David Bruce.
Support is pouring in for three sisters whose parents and their young brother died in a house fire in an apartment above a Waimate restaurant on Wednesday.

A fund set up to help them quickly reached more than $25,000 late yesterday.

Flowers and a small yellow teddy bear were left outside the family's Harvest Indian Restaurant in the town's main street.

Tej Kafle (49), his wife Tika (38) and their youngest child Prem (8) died in the fire before emergency services were called at 7.41am.

Yesterday, Waimate residents were still coming to terms with the loss and leaving tributes outside the restaurant. Those spoken to were still shocked by the tragedy.

Two shops on each side of the restaurant, but below the five-bedroom apartment, were cleaning up yesterday, but were still without electricity.

The co-operative Craft Shop sustained little damage, with only a small amount of stock lost, but Harcourts real estate had substantial water and soot damage.

Support for the three sisters was coming from all over New Zealand.

The appeal set up by Waimate Mayor Craig Rowley on Wednesday had reached $25,100 by late yesterday afternoon.

More than $5000 had also been pledged on givealittle.

Mr Rowley expressed his ''sincere appreciation for the huge amount of support''.

''It is heartening that, when an event like this occurs, we have a community that wants to rally together to support those affected by this disaster,'' he said.

He was overwhelmed by the support from around the country.

Mid-South Canterbury Fire Service area commander Paul Henderson said yesterday the fire had started in the kitchen of the apartment, but its actual cause would be revealed in a report for the coroner.

The apartment conformed to the national building standards for a private residence in terms of fire.

However, there was no fire escape and only one set of stairs.

While smoke alarms were in the apartment, fire investigators had found none were working.

How you can help