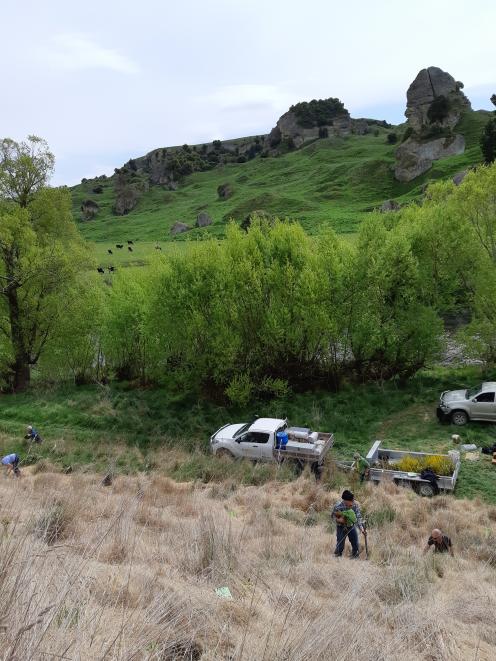 About 30 members of the community plant native species at Black Hole this month. photo: Environment Canterbury
Since announcing last winter Black Hole was to be the focus of a collaborative river enhancement project, Environment Canterbury and its partners have killed about 70% of the willows that were choking  about 3km of the once popular recreation area on South Canterbury’s Waihao River.

ECan biodiversity special projects officer Kennedy Lange said while the trees were "not the key driver of the poor water quality at the site", the steps required to return it to a recreational asset were the same steps required to improve it from an overall environmental point of view or for a downstream effect.

"Any hot day you’d get a heap of people, camping and swimming and things like that, and that wasn’t that long ago," he said.

"In the time that I’ve been involved with this sort of stuff we’ve lost what was a significant community asset and I think it does create a great focal point for the issues that we all need to address."

A recent planting day with native plant species propagated and donated by Te Runanga o Waihao attracted about 30 people. The planting  — to replace the willows  being taken away  — would also connect or create habitat corridors for birds, lizards and invertebrates.

"The other thing you do by planting some of the species we’ve planted, like wineberry (makomako), they will attract birds in from other areas.

"Those birds will come, potentially bringing seeds in from other sites that are in the area. After a point, you’ll get self-introduction of other species that you want."

ECan contributed $18,000 for the project, but adjacent landowners also contributed. There had been successive seasons where the water did not meet the recreation standard because of a high E.coli count and the presence of cyanobacteria.

It had not been in a good state "for quite some time". Intensive agricultural land use was the main cause of poor water quality in the river, but awareness of the impact of some farming practices on the water quality was improving.

The E.coli  in the water was largely from stock, he said.

"But trying to poke your fingers too far into those corners, to where you point the finger, is a bit futile at times, and if you’re actually generally managing the run-off and all those other practices, that’s what’s going to get us there," he said.

"We’ve had such great support from the farmers, personally allowing us to survey their properties.

"It’s quite a personal thing to have some outside agency come and poke into all the nooks and crannies of your farming operation."