Thick smoke blanketed a section of Beach Rd in Oamaru yesterday after a burn-off fanned by strong winds got out of control.

They were later joined by a crew from the Waitaki Rural Volunteer Fire Force, who took control of the scene after the blaze was subdued. 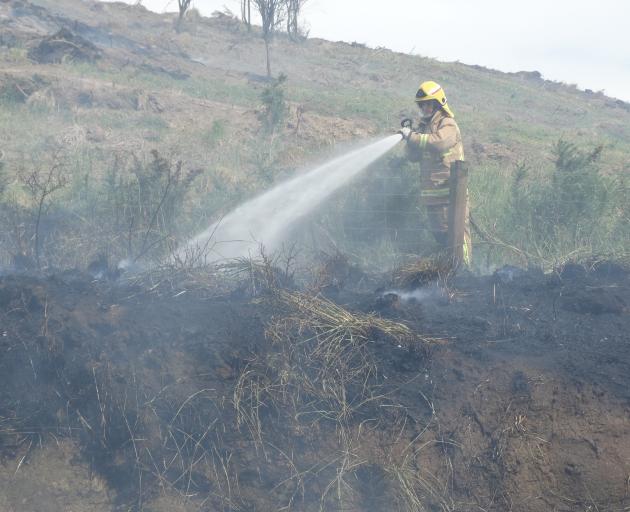 A firefighter battles an out-of-control burn-off in Beach Rd in Oamaru yesterday. Photo: Daniel Birchfield
About six firefighters battled the fire, which scorched a roughly 50m to 60m-long stretch of a grassed bank bordering the road.

Earlier, thick, grey smoke made visibility difficult and as a result, a small section of the road was closed to traffic so firefighters could tackle the fire from more than one vantage point.

Power poles on properties near the blaze did not appear to have been threatened.

Senior firefighter John Bringans, of Oamaru, said the controlled burn had been burning with no issues for much of yesterday, before it jumped on to the area above the bank and quickly spread.

‘‘The wind has picked up and just done it.’’

The fire took about 30 minutes to bring under control but more than 20 rural firefighters were still at the site dampening down scorched areas about 9pm last night.

Police were also on the scene managing traffic.