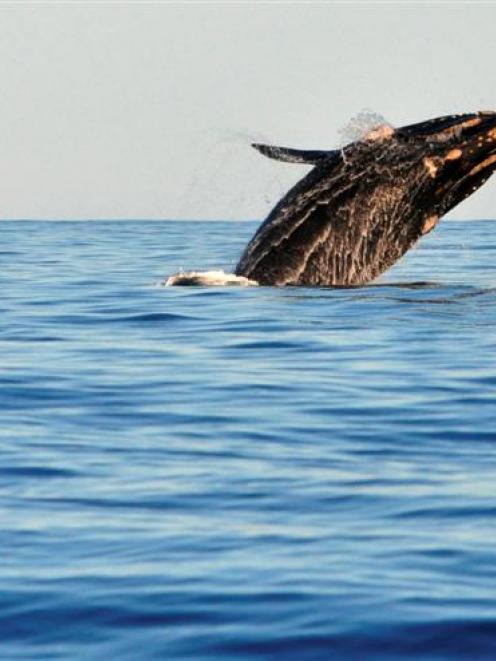 In this file photograph, a southern right whale breaches off Taiaroa Head, one of the popular spots to sight the whales.
Otago is one of three ''hot spots'' for sighting southern right whales and their visits could become more frequent during winter, new research has shown.

In what is the first comprehensive analysis of sightings of the rare whales around mainland New Zealand, research shows it is increasingly becoming an important winter habitat for them, research fellow Dr Will Rayment, of the marine mammal research group at the University of Otago, says.

While it was hoped more and more would return to mainland New Zealand during winter to calve, they were more at risk due to the overlap with human occupation, he said.

''As they recover to greater numbers they'll be a regular fixture we'll see all the time over winter months.''

Evidence in other parts of the world showed they could be at risk of ship strike, entanglement in fishing nets and noise pollution. 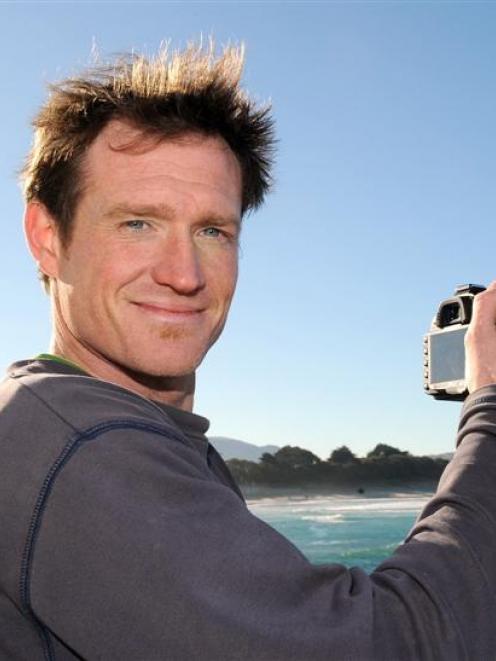 Dr Will Rayment photographs southern right whales off St Clair Beach as part of his research.
Scientists would continue to monitor their recovery around the mainland and ''do whatever we can to promote their recovery,'' Dr Rayment said.

''They used to be abundant; there were an estimated 30,000 in New Zealand waters but whaling in the early 19th century drove them to near extinction - an estimated 100 animals.''

Sightings between 1928 and 1963 were few and it seemed they were gone until a remnant population was discovered in the subantarctic islands, he said.

''As the population increases, it seems like they are now recolonising mainland New Zealand.''

Scientists from Otago, Auckland University and the Department of Conservation had analysised data from sightings, including those made by the public, and the research had been published in the latest issue of Marine Mammal Science.

From 2003 to 2010 there were 125 confirmed sightings of the whales with up to 22 seen per year. Two had returned to have their calves for a second time.

''That's much higher [than before], good evidence they are bouncing back.''

As Otago used to be the centre for the whaling industry, due to the number of whales, it was not surprising it was still popular with whales today, he said.

''Those conditions they liked back then when they were abundant are still the same as conditions now.''

The whales sought out calm waters to calve and then spent three to four months around New Zealand with their calves.

Southern right whales
• Typically black in colour but can have irregular white patches.
• Slow swimmers but very acrobatic and inquisitive.
• Adults grow 11m to 18m long.
• Only large baleen whales to be seen from the beach.
• They come close to shore to feed or breed.
• Feed on planktonic crustaceans.
• Mostly found in waters in subantarctic.
• Seen in waters around New Zealand in winter when calving.