PM encourages pupils to 'give it ago' 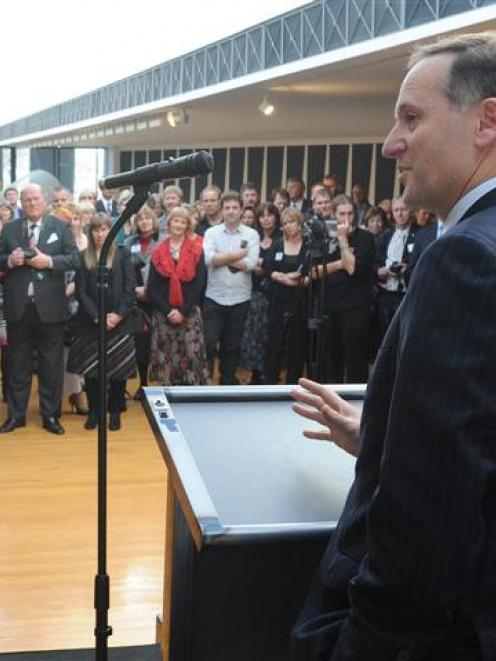 Prime Minister John Key addresses those attending the Class Act 2010 award ceremony at the Dunedin Public Art Gallery yesterday. Photo by Peter McIntosh.
"Your mum and dad, your family and friends - they are so proud of you today. It's a good day to ask for something you really want."

Mr Key congratulated the pupils for making the most of opportunities and excelling in a variety of academic, cultural and sporting fields.

His more sage and inspirational words of advice were that ability is not the key to success. Rather, the key ingredient is attitude.

Time and time again, he had seen people with great ability who failed to do well on the world's stage because they did not believe in themselves.

He encouraged the Class Act recipients to make the most of opportunities.

"I would say to you, give it a go. Make the most of the opportunities.

"Back yourself. You'd be surprised at what you can achieve."

Mr Key acknowledged the love, guidance and support of the Class Act pupils' families, friends, mentors, and particularly their parents, because he believed that was what had given them the inspiration they needed to become Class Act award winners.

"It's from loving parents that great children come."

The only criterion the newspaper gave the schools was excellence. Academic, sporting, social, artistic or cultural excellence, leadership qualities, or a combination of those was the standard by which pupils were nominated.

The 2010 award winners now joined the ranks of the 611 other Otago school pupils who had won Class Act awards since they were established in 2000.

"Be humble about your achievements, but also be proud, and continue to aim high.

"As I read recently, 'Why strive for mediocrity? There's too much competition'."

"I was really just doing what I was aiming to do academically. To receive this kind of recognition for my achievements is a grand bonus."

"It's nice to know all our hard work has paid off. And to be given a pat on the back by no less than John Key, is pretty special."

Waitaki Girls' High School pupil Emma Halkett was "stoked" to have her picture taken with Mr Key and the fact he signed her Class Act certificate.

Lawrence Area School pupil Andrew Blackmore said it was a proud moment for him and his parents. His only concern now was deciding where he would display his Class Act certificate.