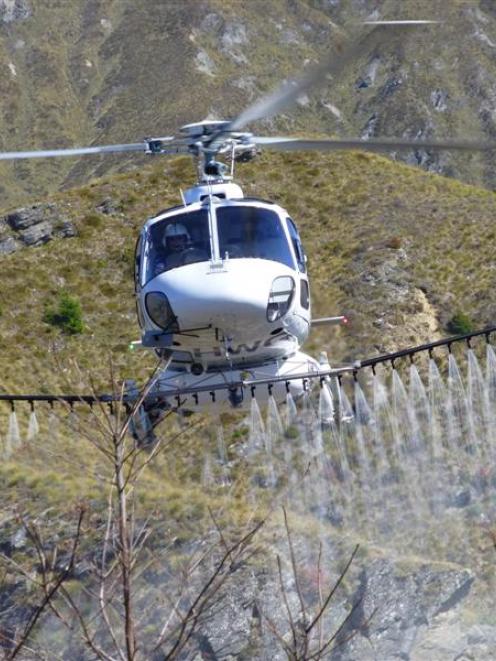 Helicopter-based eradication work began in the Skippers Canyon area on Wednesday, and is likely to continue throughout the weekend to take advantage of forecast fine weather.

It is the first sortie in a $1.4 million operation run by the Wakatipu Wilding Conifer Control Group (WCG) in partnership with the Department of Conservation, to prevent the infestation spreading from the 73,000 hectares already covered in pines.

WCG co-chairman Peter Willsman said ground operations had been under way since September and would continue until April.

However, the more cost-effective aerial control programme would be carried out over the next three months.

It would include the spraying of herbicide on the wilding forest on the upper slopes of Ben Lomond, above Fernhill.

Mr Willsman said a small ''containment strip'' would be treated to prevent the forest from spreading up to the ridge line and releasing seed into other areas.

The aerial boom spraying operation could happen any time between December 15 to January 15, depending on the scheduling of other operations and weather conditions.

Following a public meeting about the Ben Lomond operation in October, several Fernhill residents had asked to be notified before spraying began, he said.

However, it would take only two to three hours to complete, and would be at least 600 metres from the nearest house.

Technology had enabled ''huge gains'' to be made each year in the precision and cost-effectiveness of aerial control, particularly in steep, densely infested areas.

An example was the use of nozzles, imported from the United States, which minimised the drift of herbicide during aerial boom spraying by forming large, heavy droplets.

It cost about $850 a hectare to carry out aerial control operations in a dense wilding forest, compared with about $18,000 a hectare for ground work.

The summer control programme is being co-ordinated by Doc, carried out by contractor Nokomai Helicopters, and funded by a range of partners including the Queenstown Lakes District Council, Skyline Enterprises, the Central Lakes Trust, the Lotteries Commission, Land Information New Zealand and landowners and managers.