After 45 years, gondola's fortunes still going up and up 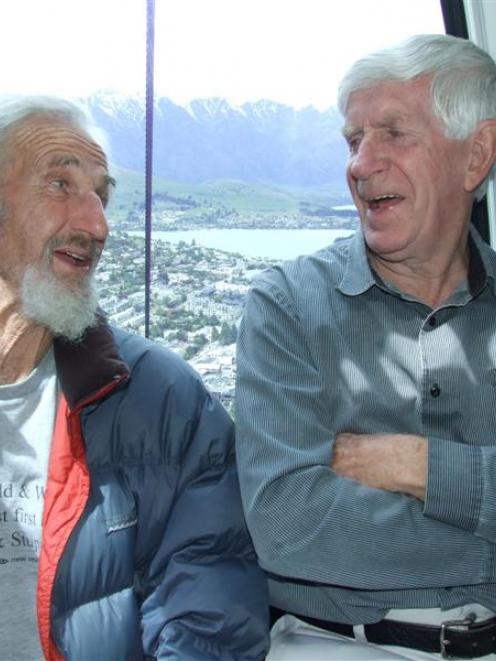 Original Skyline managing director Jon Dumble (left) and former Queenstown mayor Warren Cooper reminisce as they ride on the gondola on Friday. Photo by Tracey Roxburgh.
It was one of the most innovative ideas in New Zealand tourism and in the 45 years since the Skyline gondola carried its first passengers to the top of Bob's Peak, the company behind it has achieved more than anyone dreamed possible.

Saturday marked the 45th anniversary of Skyline Enterprises' gondola, officially opened on November 17, 1967 by Tourism Department deputy manager Mr R.S. Austin, who claimed it was one of the best potential "tourist traps" he had seen. 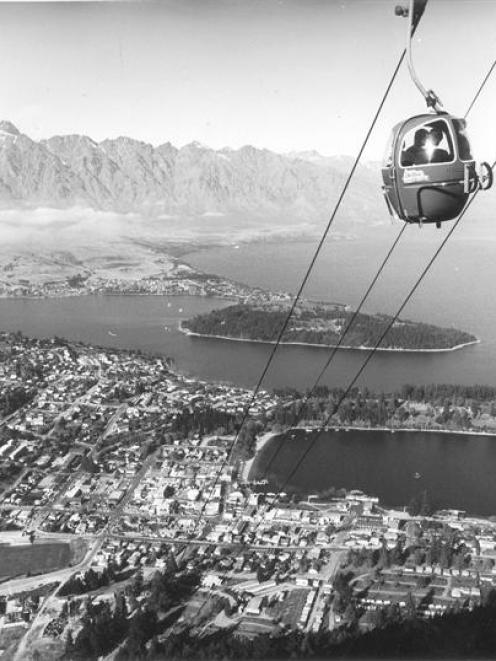 One of the original gondola cars climbs Bob's Peak above Queenstown in the early days. Photo supplied.
The company, which has diversified its operations at the summit of the peak and its income streams over the years, will welcome its 14-millionth visitor on the gondola this summer.

"There was a strong feeling that it would not be successful, because it was completely innovative.

"The mayor at the time [George Cochrane] was very dubious."

The gondola's proponents - led by Hylton Hensman and Cliff Broad - had to negotiate with both the Government and the Queenstown Borough Council for the land, a process which was "not easy", Mr Dumble said.

It was thought the gondola would "potter along quite happily and make a reasonable income for those 15 original shareholders", he said. Its backers had no inkling of how successful the company would become.

Skyline Enterprises chairman Ken Matthews said the success of the operation - and the company - boiled down to "a great idea".

One of the gondola's legacies was the other business opportunities which had opened up, allowing a diversification of income stream and providing employment, locally, nationally and internationally.

Former Queenstown mayor Warren Cooper - a councillor in 1967 - recalled being in the third gondola on opening day with his wife, Lorraine, his mother and fellow councillor Reg Flemming.

"I think in general the public were quite excited. It was something very different for New Zealand and of course for Queenstown."

However, building the gondola in today's climate would be difficult, if not impossible, he said.

"It seems to me that roads and tunnels and gondolas and monorails lead people to places of great beauty, and we should be prepared to allow people to enjoy that.

"We need more things like that and we should never allow ourselves to run out of ideas."