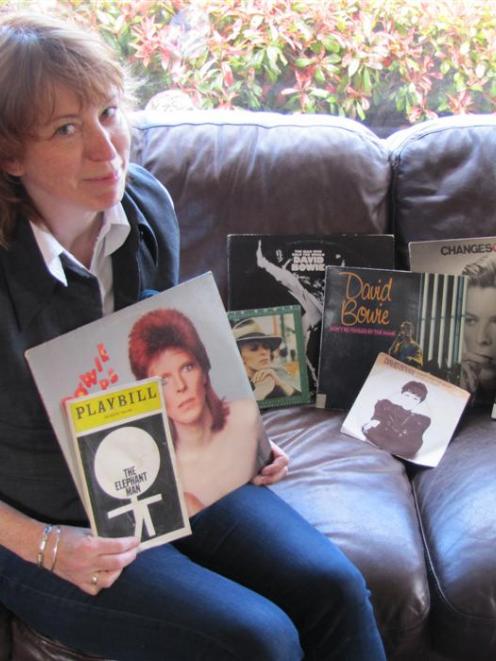 Margaret O'Hanlon displays her Bowie collection, holding a playbill from a Bowie show she saw in 1980. Photo by Naeem Alvi.
A Queenstown woman who wrote a David Bowie-themed musical is "delighted" to hear the rock star would like to see it for himself.

Margaret O'Hanlon received an email from Bowie's personal assistant Eileen D'arcy, in New York, which said Bowie would love to see a tape of Rock and Roll Suicide.

New York-born Mrs O'Hanlon said she was dubious at first.

"I searched the address and checked the information with friends in New York and it came back kosher," she said.

The Bowie-inspired musical opened at Arrowtown's Athenaeum Hall on Wednesday and closed last night. The musical used Bowie's songs for lyrics and no additional dialogue was used.

Writer, co-producer and a performer in the 90-minute production, Mrs O'Hanlon said she was "just over the moon ... it's like something from my wildest dreams".

A synopsis of the production and a song list have already been emailed to Bowie's secretary.

Mrs O'Hanlon received the email last Friday and kept the information a secret from the 16-strong Wakatipu cast until minutes before the opening performance on Wednesday.

The production, which Mrs O'Hanlon began writing in June, follows the story of Joe Rockstar, played by Max Gunn, an aspiring rock and roll musician who becomes self destructive under the pressures of fame.

Pearly Mcgrath, who played Suzie Diva, said she was "amazed" to hear the news.

Mrs O'Hanlon plans to have footage of the show edited and will send it to Bowie "as soon as possible".

In Mrs O'Hanlon's email response to Bowie's assistant, she asked why Bowie was interested in the production and received an emailed response from the star's assistant which said: "I would think that it's because it's not like the usual tribute show."

Before the production, Mrs O'Hanlon had planned to pay royalties for each of the songs used to the Australia and Performers Rights Association, as she believed this was the case if no other dialogue is used alongside the material.

Mrs O'Hanlon received notification from Universal Music in Australia on the opening night saying the show had been deemed to be using Bowie's music in "dramatic context".

She has since filed for copyright permission and is awaiting response.

Mrs O'Hanlon was not concerned the issue would develop into anything serious.

"It's not an issue with the man himself [Bowie] because he is so curious to see it."

Mrs O'Hanlon said overall, the three-day production had been a huge success.

However, she has not made plans to show the musical anywhere else soon.

"We've done better than we ever expected. The show's nearly sold out every night but we're all looking forward to a break."