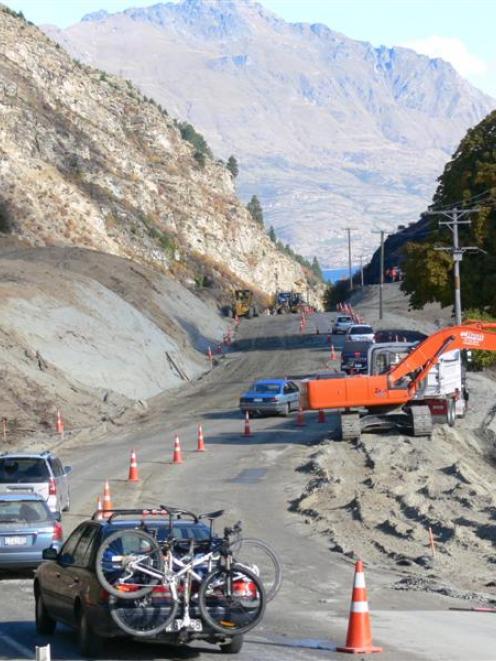 The Gorge Rd upgrade will definitely be sealed before winter arrives, although possibly using a "sacrificial" seal in the short-term. Photo by Felicity Wolfe.
Wakatipu motorists be warned - winter is coming, and with it ice, cracks, potholes and a host of other roading woes big and small.

The first of those headaches was unveiled yesterday, when Queenstown Lakes District Council roading manager Ian Marshall confirmed metal working - used to reinstate road surfaces worn down by constant traffic - would be deferred on all Wakatipu roads this winter.

The decision was made after several "significant" events over the past year, including winter freezing and thawing last year, chewed through the Wakatipu's general maintenance budget for roads, he confirmed in a report to the council's utilities committee yesterday.

The council's contractor - Downer EDI Works - had advised council staff the roads could survive the winter without metal working, although Mr Marshall conceded "something may happen that we didn't plan for".

And worn road surfaces might not be the only problem this winter, after Downer EDI Works also raised concerns about its own ability to respond in a timely fashion to cracks appearing on roads, Mr Marshall said.

The problem stemmed from the contractor's inability to schedule its own resources, particularly those based outside Queenstown, he said.

The "disappointing" news meant some small resealing projects would not be addressed as quickly as desired, although the contractor was working to address the issues, he said.

The council was also re-evaluating its use of calcium magnesium acetate (CMA) spray, after the price paid for gravel used to grit icy winter roads soared from $8 a cu m to $25, adding up to $60,000 to the winter roading bill, he said.

The chemical, which when mixed with water could prevent ice forming for up to seven days, had previously been considered prohibitively expensive for most roads.

However, with the rising cost of gritting, that would be re-examined, and the substance could become more widely used this winter, he said.

The cost of grit had increased because gravel extraction from the Shotover River had stopped, as a result of resource consent complications.

Grit could be trucked in, but transport costs were adding to the bill, he said.

There was one bit of good news to emerge from yesterday's meeting - the Gorge Rd upgrade would definitely be sealed before winter arrived, although possibly using a "sacrificial" seal in the short-term, Mr Marshall said.