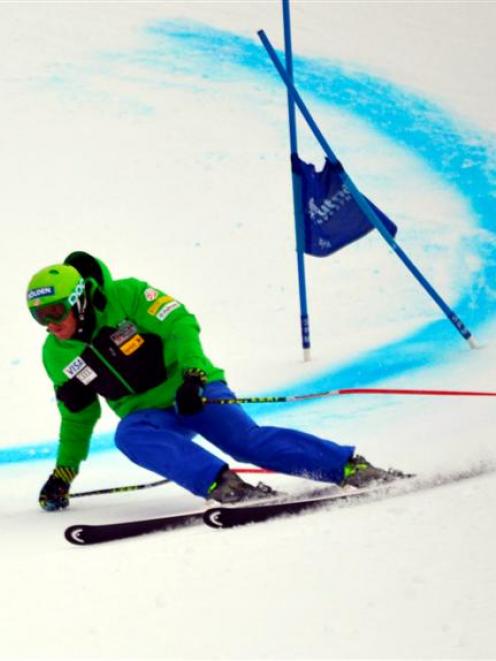 United States ski racer Bode Miller in action on Coronet Peak yesterday ahead of the 2013 Winter Games NZ. Miller underwent microfracture knee surgery in February. Photo by Morgan McFie.
While recreational skiers may have their concerns about conditions at Coronet Peak, elite ski racers in Queenstown for Winter Games NZ are giving the course a thumbs up.

Games media spokeswoman Victoria Murray-Orr said most of the international teams had arrived in the resort ahead of the 2013 event, which officially opens in Queenstown on Thursday.

Included in those teams were ski racers from the United States, Austria and the United Kingdom.

The Coronet Peak course, to be used for the slalom and giant slalom events, had been tested by teams over the weekend who had reported they were ''happy with the course and how it's skiing''.

However, the snowfall ''isn't going to make a huge difference to the quality of the course'', Ms Murray-Orr said.

''The alpine racing course is very different to the general piste. It's intensively groomed in terms of the way they create it - they inject the snow with water to create a very hard course.

The games will begin on Thursday with the FIS Australia/New Zealand x-country skiing sprint at Snow Farm, before the opening ceremony in Queenstown at Earnslaw Park from 5.30pm.

The event runs until August 25 in Queenstown, Wanaka and Naseby, ending with a closing ceremony at Wanaka.