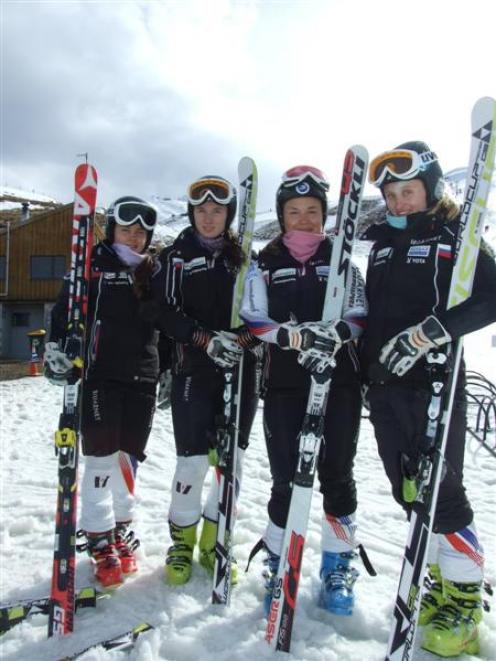 Taking a break from training at Coronet Peak on Friday were members of the Russian women's alpine ski team (from left) Anastasia Romanova, Daria Astapenko, Anna Sorokina and Ksenia Alopina. Photo by Christina McDonald.
While completing their "summer" training programme at Coronet Peak, the Russian men's and women's alpine ski teams have also been competing in a transtasman competition.

Russian women's alpine skier Anna Sorokina, who came third in the women's slalom behind Eva Marie Brem of Austria in first and Rikke Gasmann-Brott of Norway in second place, said the women's team had been in Queenstown for the past week.

Sorokina said this was her third year training in New Zealand, although in previous years the team had been based at Mt Hutt.

"It's perfect snow for training in the summer," she said.

New Zealand was "for sure different ... but mountains and snow, it's all the same".

This winter, a host of northern hemisphere ski and snowboard teams have flown to southern fields to prepare for the northern World Cup season which begins in October.

The Australia New Zealand Cup is a series of races in Australia and New Zealand, with the finals to be held at Mt Hutt from September 3 to 11.