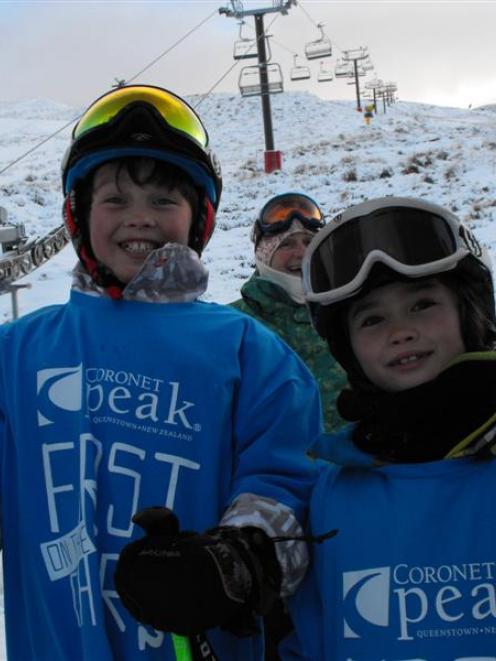 The two siblings and their father, Tim, were up the mountain by 5am on Saturday to get to the front of the line and be first on the chairlift.

While dad yawned, you couldn't wipe the smile off Cougar (9) and Tallulah's (7) faces.

"It was all their idea," Mr Bryant said.

Meanwhile, on the second chairlift up Coronet Express were Queenstown couple Robina Bodle and Jef Desbecker, who had previously made the first tracks of the season for about 15 years running before the younger Bryant pairing showed to the Coronet scene.

By 9am, a line of about 200 patrons backed up before ski area manager Hamish McCrostie cut the ribbon to start the ski season for the region.

"It's been a fantastic weekend. There has been well over 1000 up each day and the snow has been really good for this time of year," he said.

"We're absolutely ecstatic to be open."

"Last year was quite an anomaly. I have never experienced a May or June like that, so we are back into normal patterns now."

Although no snow is expected to fall this week, Mr McCrostie said he took comfort in knowing the field's 12 snow guns would give them a good amount of snow before the weekend.

"It's going to be fine this week, but cold enough for the guns to keep making snow."

He said a weekday made no real difference to numbers once the season was under way.

"Once the season gets open, every day is a Saturday.

"We've received about 20cm of natural snow in the build-up to opening but we've been able to open with a 35cm average base, thanks to machine snow and some nice top-ups."

Snow levels so far had allowed the fields M1, Express Way and Big Easy to be open and Mr McCrostie said they would look to open more terrain as soon as the snow-making machines and weather allowed.

Mt Hutt also opened on Saturday and Remarkables is set to open this weekend.