Courts to get makeover 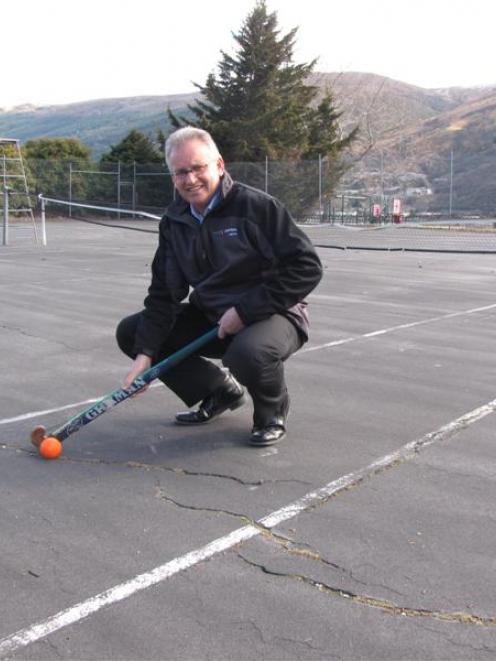 Queenstown Hockey Club coach Ewan Maxwell at the old tennis courts which are soon to be resurfaced and made suitable for hockey practice. Photo by Joanne Carroll.
The tennis courts at Frankton will get a $99,000 makeover after one of the courts was closed because it was too dangerous to play on.

Council project manager Russell Engelke said the court was closed after a Frankton woman injured her leg while playing tennis there in November last year.

The courts were "in a state of disrepair", with large cracks in the asphalt.

The woman had sprained a foot when she twisted an ankle in one of the cracks.

She was treated at Lakes District Hospital for torn ligaments.

Her foot was put in a cast and she was unable to work for seven days.

Queenstown Lakes District Council's community services committee approved funding a shortfall of $14,000 for the project at its meeting yesterday.

The Queenstown Hockey Club asked the council last May for a hockey pitch because club members had to travel to Cromwell to practise on an all-weather surface.

In August, the committee agreed to resurface the courts with Astroturf and install lighting at a cost of $99,000, subject to external funding being found.

Mr Engelke said the fundraising had been only "partially successful".

The council had already allocated $60,000 for the work in its annual plan, the Queenstown Hockey Club donated $10,000 and the Community Trust of Southland $15,000.

A shortfall of $14,000 remained, which the council would make up from savings on its landscaping project of State Highway 6/6A from McBride St to Yewlett Cres.

Cr Vanessa Van Uden said the council had "borrowed every cent" for the landscaping project, so it was still going into debt by using the "savings" elsewhere.

However, the funding was approved unanimously by the committee.

Andrea Gilbert, of the Queenstown Hockey Club, said she welcomed the committee's decision.

She said the club was the only one in the Southern Lakes area without a good facility on which to practise.

The club's long-term vision was to raise funds for a full-size pitch near the Queenstown Events Centre.

However, the practice hockey pitch would encourage more members to join, as they would not have to travel to Cromwell for practice.