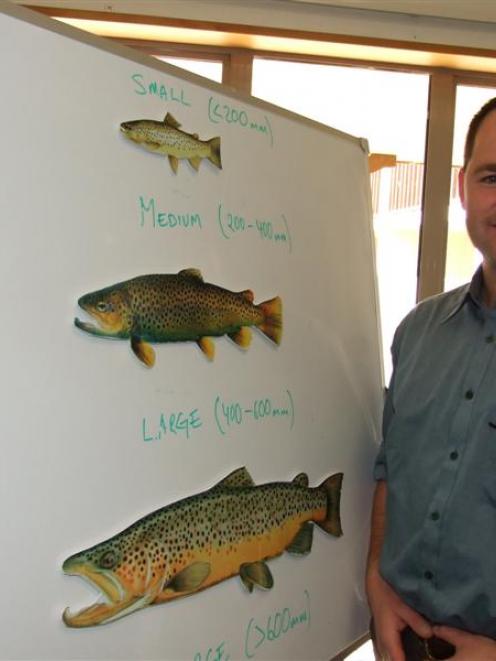 Otago Fish and Game officer Rasmus Gabrielsson told a special tribunal the Nevis River had a reputation for producing very large brown trout. Photo by Lynda Van Kempen.
Fish was on the agenda for the second day of the Nevis River hearing before tribunal members Rauru Kirikiri, Carolyn Burns and Richard Fowler.

Freshwater ecologists Dean Olsen and Richard Allibone gave evidence about the fisheries supported on the river, the native fish found in the waterway and the habitat of the fish species.

Otago Fish and Game officer Rasmus Gabrielsson spoke about recent surveys which revealed the size and age of the fish found in the Nevis.

The hearing, which will determine whether damming should be allowed on the Nevis River, will continue on Tuesday.

It is expected to take up to four weeks and is before a special tribunal appointed by the Minister for the Environment.

The application to amend the water conservation order on the river has attracted 248 submissions.

The Nevis River produces unusually large brown trout which live to an extraordinary age, a special tribunal in Cromwell has been told.

Mr Gabrielsson said the river was home to some very large trout - over 60cm in length.

He told the special tribunal appointed to hear amendments to the existing water conservation order on the river that the entire Nevis was an outstanding freshwater sports fishery for trout.

New Zealand and Otago Fish and Game Councils are seeking a prohibition on damming it.

" . . . while a day fishing in the Nevis may not produce big numbers of fish, the ones caught are usually impressive," Mr Gabrielsson said.

Very cold water and a high rate of "catch and release" by anglers meant the trout grew to an unusually large size over a long period.

In New Zealand, in general, few trout lived beyond 10 years, but a survey of fish from the Nevis revealed trout aged up to 15.

The South Island was renowned for large trout and Otago and Southland rivers were the main area in which to find them.

The reputation of the Nevis for larger-sized catches was one of the reasons it attracted anglers and fishing guides from throughout New Zealand and overseas.

Mr Gabrielsson said a hydro-electric development on the Nevis would result in the loss of up to half the highest quality habitat for brown trout.

"Such low growth rates indicate that the fishery in the upper Nevis is sensitive to environmental change such as would occur with damming and water abstraction, and harvest," he said.