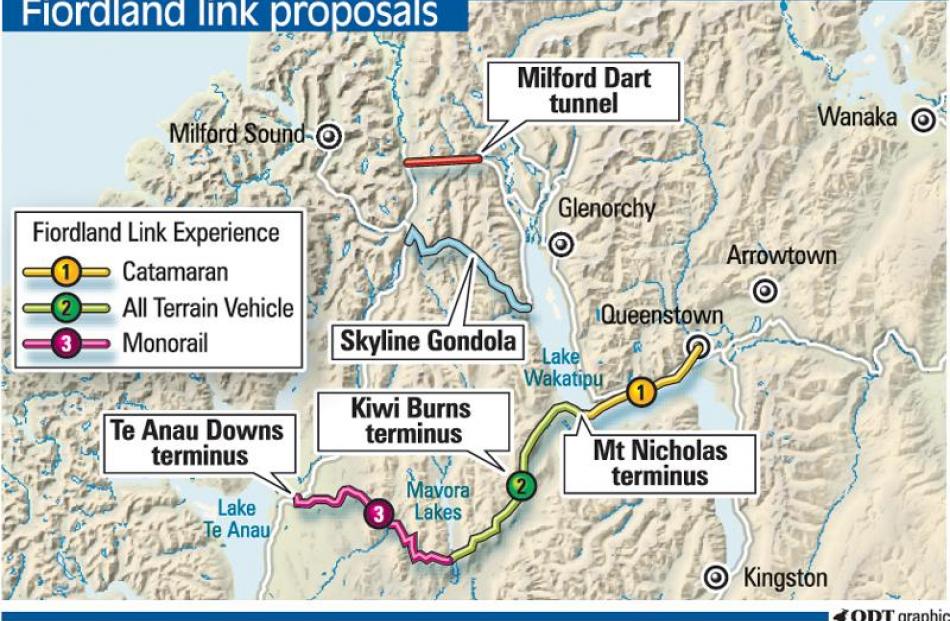 A proposal to establish a Caples Valley gondola may be revisited after a new report ranked it the highest of 12 options to access Milford Sound.

The MWH report, commissioned by Environment Southland, assessed proposals, both active and inactive, based on risks and opportunities.

Listed second was the mandatory park and ride option, a shuttle bus which was mooted to reduce congestion on both the Milford road and viewing points.

Based on the findings, the Sky Trail Milford Gondola, initially proposed by Skyline Enterprises Ltd and Ngai Tahu in 2001, ''has the highest overall score'', the report said.

Skyline Enterprises managing director Ken Matthews yesterday said he was unaware of the report, but based on its conclusion it would be ''appropriate'' to revisit the proposal.

The 12.6km gondola, estimated to cost up to $110 million to build, was to carry 900 passengers an hour, with a one-way journey taking about 35 minutes.

It would have reduced the 12-hour round trip by about three hours.

''There was a change to the management plan, or the Conservation Act, ...that precluded the [project eventuating]."

Mr Matthews said yesterday he had not had time to think about revisiting the gondola proposal or talk to Ngai Tahu, but it was ''food for further consideration''.

''We always maintained it had the lowest impact on the environment of any of those other means of access ... to Milford''.

''In light of what you've told us, then we would want to have another look at it; it would be appropriate to do so."

While the gondola option scored highly, the report was ''not about picking winners''.

''It has ranked the highest based against the ... criteria that we used. We did not take into account if it was financially viable. All we have done is rank apples with apples."

He said the gondola was still an option ''should those people wish to activate it''.

The report resulted from publicly available information, and, as such, the gondola option had significant information gaps and uncertainties because it had ''got to a certain point in time and then nothing [further] publicly has happened to it''.

While the report said there was ''significant uncertainties over the affordability and consentability'' for both the monorail and gondola, they ''tended to score well for all except the environmental criteria''.

Among the criteria used to assess the options were long and short-term impacts on the environment, overall tourist experience, economic impact for both local communities and Southland, and national and international image.

Milford Dart Ltd director Michael Sleigh said he had not seen the report but ''looked forward to seeing it and commenting when it's available''.

Both the Milford Dart Tunnel and Fiordland Link Monorail have been approved in principle, but Doc media adviser Reuben Williams said yesterday a final decision on the proposals may be ''some time off''.