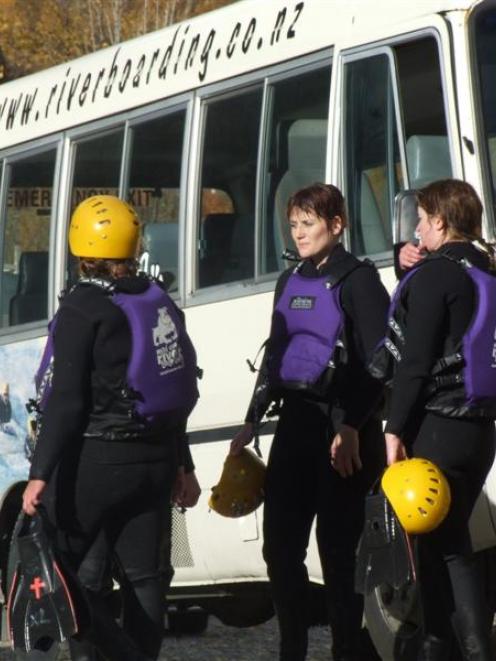 Survivors of yesterday’s ill-fated Mad Dog River Boarding trip gather beside the company minibus. Photo by Craig Baxter.
River guides involved in yesterday's Kawarau River drowning are ‘‘exceptionally cut up'' after battling in vain to save the English tourist who died, their employer says.

Mad Dog River Boarding owner Brad McLeod said all river boarding expeditions had been cancelled following yesterday's death, out of the respect for the dead woman, her boyfriend and family in England.

The decision curtailed a season not expected to finish for another three weeks, he said.

Instead, the company's guides and other staff were involved in a full debriefing late yesterday, and an internal investigation would be conducted alongside a police investigation, Mr McLeod said.

The company - which Mr McLeod bought in 2006 - had operated for 13 years and had ‘‘exceptionally detailed'' training and safety plans in place, he said.

The company's guides had helped an estimated 25,000 tourists to safely negotiate the Kawarau River without a single serious injury or death, prior to yesterday's accident, Mr McLeod said.

A devastated Mr McLeod said he went ‘‘numb'' when told the news shortly before 3pm.

‘‘You don't know what to feel. You body goes numb. It shakes me up just as hard as the boys on the river,'' he said. ‘‘All the guides were probably the same.''

The last thing the company's staff wanted to do following yesterday's death was return to the river, he said. The guides involved in trying to save the woman were ‘‘exceptionally cut up''.

Mr McLeod said he would give the dead woman's family in England, and her boyfriend, space before deciding whether to contact them. The boyfriend was believed to be travelling to Dunedin.

The Mad Dog website said strict safety procedures were observed while on the river, but warned ‘‘an element of risk'' remained for all participants.

River boarding was best suited to clients who enjoyed water sports and had a ‘‘reasonable'' swimming ability. Clients were given a safety talk before entering the river.

Once in, clients kicked their way in to the river's main current and were washed down stream through a series of rapids over 45 minutes, the website said.

The company's guides were among the most experienced in the world, and were chosen ‘‘for their skill in river boarding, swimming, communication, first aid and local knowledge''.

The company could not be held responsible for personal injury or equipment lost and damaged, the website warned.