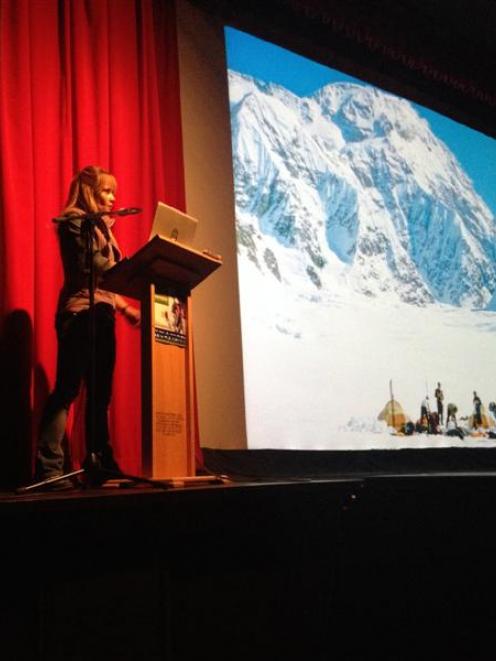 United States climber Kitty Calhoun talks about the effect of global warming on climbing routes to a packed house at the Queenstown Memorial Hall on Thursday. Photo by Mark Sedon.
Packed houses at the New Zealand Mountain Film Festival in Queenstown have helped make this year's edition a record-breaker.

Held over seven days in Wanaka and Queenstown, the festival of films, speakers and seminars with an alpine recreation theme came to a close at the resort on Friday.

Director Mark Sedon, of Lake Hawea, said the festival had two ''huge nights'' at the Queenstown Memorial Hall, with Friday's drawing the biggest turnout of all.

''We squeezed as many in as we could - there wasn't a spare seat.''

His target of 4000 patrons throughout the seven days had been comfortably exceeded, helped by a 20% increased turnout in Queenstown.

The festival's profile and reputation continued to grow, he said.

''We put on a really good programme last year, and I think people responded to that.''

Having three films by Queenstown and Wanaka filmmakers included among the dozen New Zealand-made films screened helped locals feel a connection to the event.

This year's speakers were also a drawcard, with United States climber Kitty Calhoun especially ''striking a chord'' with her ''last ascents'' talks about the effects of climate change on climbing.

A record number of 74 films were also screened, selected from the more than 120 films submitted.

Technology such as small digital cameras, editing software for home computers and even the use of drones meant filmmaking was easier and cheaper, he said.

A selection of films from the festival will screen at 15 venues during a two-month tour of the country beginning in Twizel on August 2.

Queenstown residents will have another chance to see the films at a screening on August 17 as part of the Remarkables Ice and Mixed Festival.